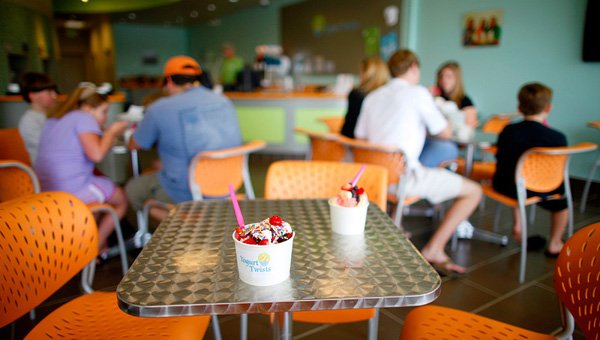 Yogurt Twists on Highway 280 is one of a handful of frozen yogurt stores in the area that have been enjoying recent success. (Reporter Photo/Jon Goering)

When Barbara Brickner tasted frozen custard for the first time in Kentucky, she knew she had found something special.

“About five years ago, I had frozen custard for the first time. I fell in love with it and knew I wanted to bring it to Birmingham,” she said.

Brickner began fulfilling her dream with a self-serve frozen yogurt and custard shop, called Treat-Your-Self, at Patton Creek in Hoover in December 2009. About three weeks ago, she launched another location in the Lee Branch shopping center off of U.S. 280 in Greystone.

“The response has been great,” she said. “A lot of people have fallen in love with the custard. They come in and make a beeline for it.”

Treat-Your-Self boasts several flavors of frozen custard and frozen yogurt, along with more than 75 premium toppings, including chopped-up candy bars, fruit and more than a dozen kinds of gummy candies.

Richard Shealy, owner of Yogurt Twists, close to the Fish Market and Starbucks off U.S. 280, said his 19-year-old daughter suggested the business idea after visiting another frozen yogurt shop with cramped space.

He looked into buying a franchise but ultimately decided to make his own mark with a new self-serve frozen yogurt business. However, he considers the U.S. 280 location “the first of its kind,” possibly with more franchises to come.

Customers love his location, he said.

“Everybody thanks me that they don’t have to battle traffic anymore,” Shealy said.

Yogurt Twists offers 16 flavors of frozen yogurt and sorbet, ranging from banana pudding and espresso yogurt to watermelon sorbet. The toppings include fruit, cereals and what Shealy calls his “private stash”: cut-up gourmet biscotti in chocolate and white chocolate sauces.

His varying flavors and toppings mean anyone can tailor their dessert to their specifications.

“You can be as good or as bad as you want,” Shealy said.

The self-serve concept is a big part of the sudden comeback of frozen yogurt, he said.

“They get to pick what they want. It’s quicker, because you do it yourself, and everybody gets served at the same time,” he said. “There’s a lot more flavors than there used to be.”

Sometimes, frozen yogurt is part of Shealy’s own diet plan.

“It’s so hot here in the South, frozen yogurt’s lighter than ice cream,” he said. “I’ll skip lunch and have a bowl of frozen yogurt instead of a double (burger).”

Yogurt Twists is about to change store hours to coincide with school opening again. For store information or to inquire about hours, call 995-0002.