All victories begin with the home team

As school starts, we’re thinking about our teams, our seasons and our strategies. Watching the State Junior Team Tennis Tournament in Auburn last week caused me to reflect on team sports and why we’re so invested in our teams.

Whitney Hamner was the lead player on the Pelham Racquet Club’s 14 and under team — the Heat. Hamner won all of her matches. The surprising element of this great tennis player’s performance is that this formidable athlete is just as sweet as she was growing up watching her brother play baseball at Pelham City Park.

Although tennis is often considered an individual sport, at the State Team Tournament, tennis becomes as much about team effort as football. The total number of games won by all players on the team determines the winner. The goal for each player is win all they can, never give up and encourage their teammates.

Just as Whitney was in the bleachers supporting Jarrod for baseball, Jarrod was there for his sister on the last day of the State Team Tennis Tournament. In fact, all of the Hamners were cheering Whitney on in her third appearance at the State Junior Team Tournament.

“Whitney plays in two tennis tournaments a month. She goes to PRC pros Steve Faulkner’s classes three days a week and Rusty Wilkes’s Academy classes and plays on his 14 and under team. We thought Whitney would get tired of tennis, but she seems to love the sport even more,” said Ann Hamner, Whitney’s mom.

Hamner also plays for the Riverchase Middle School tennis team. Team play teaches life-changing lessons. Ultimately, we’re equipping our kids to compete against themselves and push themselves harder than they believe they can.

The responsibility and privilege of parenthood is not creating superstars. Parents and teachers plant seeds of perseverance and hard work hoping that these virtues will blossom as they children become adults who will eventually find curse for diseases, find ways to produce clean water and will otherwise grow into the next generation of problem solvers, peace seekers and prayer warriors.

As the school year begins, remember your home team and remember why we compete. As Ann Hamner said, “All victories begin at home.” 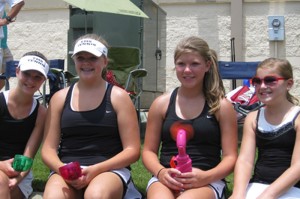 Whitney Hamner, and teammates try to cool off between matches at the State Junior Team Tennis Tournament in Auburn. Pelham Racquet Club 14 and under team (L-R) are Madi Bria, Madison Mims, Hamner and Faith Nolen.

By KENNEDY TOLBERT/Community Columnist Every year around this time, families gather at Brookwood Medical Center for a reunion of past... read more