All of the girls commented that this was the best cheer camp experience ever.  They enjoyed the time to get to know each other and became closer as a team.

“When I first met them in March, most of them told me that their team goal this year was to get along and grow closer as a squad,” Freeman said. “They achieved this goal at camp.”

They won second place for their home pom routine, five superior ribbons, one excellent ribbon and a spirit stick.

Madison Brooks made it to the final round of the jump off competition and received an award for best all-around in leadership qualities and positive attitude.

Madison Brown said this year’s camp was an awesome experience.

“Everybody worked hard to get along and work together. It was a real eye opener for those who have never attended UCA cheer camp,” Brown said.

Before camp, the varsity girls were paired with the junior high in a big sister program little sister-to help ease camp worries.

One night they had a dance party in the dorm. It was a chance to have some down time and gave the big/little sisters the opportunity to relax and have fun after a hard day’s work.

Robinson is invited to participate in the New Year’s Day parade in London and Madison and Morgan have the opportunity to participate with the UCA squad in the Macy’s Thanksgiving Day parade. 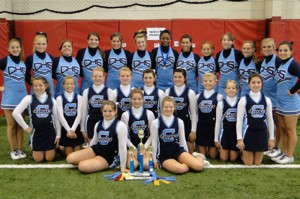 By SHELBA NIVENS/Community Columnist “The Homemakers Club was once called the Tomato Club,” explained Pat Wyatt, president of the Chelsea/Westover... read more