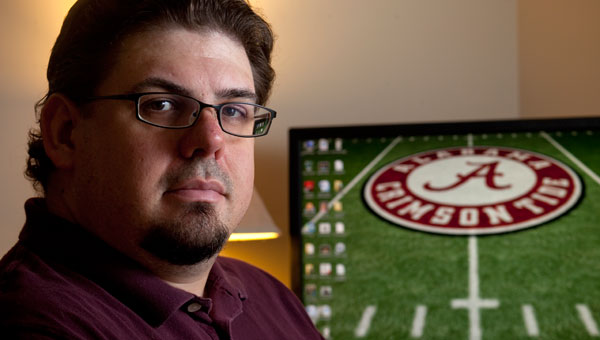 As the old adage goes, college isn’t for everybody.

However, for one Alabaster resident, an assignment in a web page developing class has led to a lifelong hobby.

It wasn’t until his time at ITT Technical Institute that Mike Gardner, 38, found his true calling as a graphic artist.

Gardner and his fellow classmates were assigned to build a page using multiple photos. Gardner, who graduated from the college with an associate’s degree in computer-aided drafting and design in June 2006, started a website – mghelmets.com – to display his artwork, which was comprised of football helmets accompanied with team logos.

“I really got into Photoshop and computer graphics,” said Gardner, a graduate of Pelham High School.

It didn’t take long for Gardner’s design talents to be noticed.

Shortly after the launch of the website in May 2006, e-mails and phone calls began pouring in. Gardner said sports fans, coaches and even athletic directors nationwide started contacting him, wanting to know if he could design logos for their schools.

“I found out there was an audience out there that liked (the designs),” Gardner said. “It got my name out there.”

While college may have served as the catalyst for Gardner’s website, his passion for graphic design started as a child.

“As a kid, I watched football all the time, and I drew the logos with crayons and markers,” Gardner said. “It kind of just took off from there.”

It’s a process that has come a long way from its time-consuming starting point.

Gardner starts by inserting a multilayered template into Adobe Illustrator to create the team logo. Once the logo has been made, it is brought into Adobe Photoshop to find the proper layer while bringing in highlights and shadows. Gardner then uses one of the software’s tools to “curve” the image of the logo over the helmet. Once the file is saved, it is uploaded on the website and another design is finished.

Gardner, who does not charge for his services, has created helmet designs for everybody from the Canadian Football League to more than 8,900 high schools across the country, including the teams featured in the Shelby County Reporter preseason football magazine.

Birmingham’s CBS 42 as well as a news outlet in North Carolina have used the designs for their Friday night football scoreboard shows.

“I don’t have any problem giving (the designs) to them,” Gardner said.

The designs have drawn positive feedback from all parts of the country and beyond.

“I get a lot of great responses,” Gardner said. “I’ve gotten e-mails from Russia and Italy – really from around the world. A lot of people tell me they really appreciate my work, especially the high schools.”

The website has led to additional design opportunities, which serve as Gardner’s source of income at the moment. He doesn’t have plans to start making a profit from his website.

Gardner is hopeful he will accumulate enough earnings on the side to support he and his family.

“Hopefully, I won’t have to get a real job,” Gardner said. “I’ve got a 16-month-old daughter, and I’d like to stay home with her.”

She thought it was over. The former Pelham junior varsity volleyball coach turned in her resignation papers, thinking she had... read more