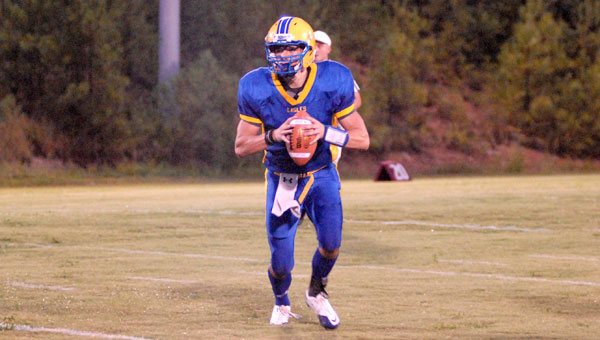 Hope Christian School quarterback Zac Hughes looks for an open receiver in the Eagles' 42-0 shutout victory over Heritage Christian in the season opener for both teams Aug. 13. (Reporter Photo/Wesley Hallman)

It took the Eagles just two plays to start off on the right foot in 2010.

Hope Christian linebacker Caleb Rettig sacked a Heritage Christian quarterback in the end zone on the game’s second play for a safety as the Eagles ran away with a 42-0 victory over the Crusaders from Brantley in a weather-shortened game Friday night at the Columbiana Sports Complex.

The contest was the season opener for both teams.

“Everybody performed well,” head coach Mark Rettig said. “Our guys  were well prepared and looked like they were pretty well ready for  what the other team was going to bring.”

Senior quarterback Zac Hughes led the Eagle offense, accounting for three touchdowns on the night. Hughes finished 3-for-3 for 35 yards and two scores through the air while also scoring on a 17-yard run.

Wide receivers Terrence Moore and Caleb Douglas hauled in one  touchdown pass each. Junior Eric Spence added a 15-yard touchdown scamper — the Eagles’  first touchdown of the new campaign — with 10:50 left in the opening  quarter.

The Eagles scored on four of their six offensive plays and finished with 80 yards of total offense in a quarter and a half.

As impressive as the offense was, the defense stole the show.

The Eagles weren’t in the giving mood on this night, as the defense held the Heritage Christian offense to negative 37 yards of total offense and did not allow the Crusaders to get beyond their own 30-yard line.

“Our defense was a dominating force,” Rettig said. “That was easy to see.”

Defensive back Glyn Glover capped the scoring for Hope Christian, as the junior tipped and intercepted a Heritage Christian pass over the  middle. Glover returned it 17 yards to paydirt with just more than 8 minutes left before halftime.

The game was suspended halfway through the second quarter after lightning was seen in the area. After deliberation between the two teams, the game was called approximately 30 minutes later.

The Eagles will host First Assembly Christian School in their next game Aug. 20.

The University of Montevallo Athletics Hall of Fame Committee welcomes three former student-athletes and one former student who attended the... read more