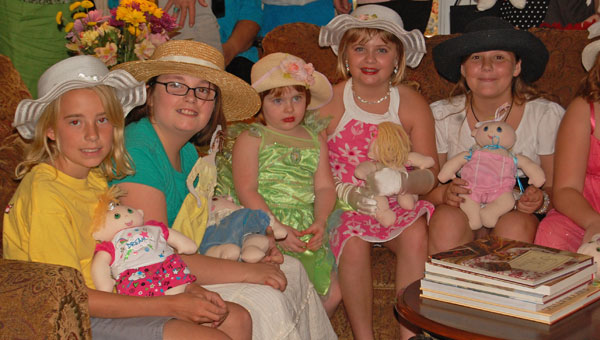 Williams hosted the “Mom, Dolly and Me” tea party at her home as the conclusion to the doll-making program she held for Girl Scout troop 76 this summer.

Once a month, Williams hosted classes for the girls at the Parnell Memorial Library, teaching everything from how to start a collection to how to sew hand-made doll clothing. At the end of the program, each girl made her own cloth doll.

The program was also an outreach program for the Magic City Doll Club. The club is 25 years old and Williams is the current president.

All eight girl scouts that participated were inducted as charter members of the new Junior Doll Club.

Williams said the program allowed her to pass on her love of dolls to the next generation of collectors, just like her grandmother and her mother did for her.

“I truly believe that when you have a talent, you need to share it with other people,” she said

“I’ve started counting my dolls several times and I’ve never made it all the way through,” she said.

At the tea party, the girls got to see Williams’ collection for the first time. She hopes it will inspire them to keep collecting and keep making dolls.

“This is a good start for them to have a wonderful hobby,” she said. “It’s something that is fun to share with others, but it’s also something they can do on their own whenever they want to.”

Williams’ collection includes dolls from her childhood, a souvenir doll she got on her honeymoon and several dolls that were gifts, but many of her most prominent dolls are ones she made herself. 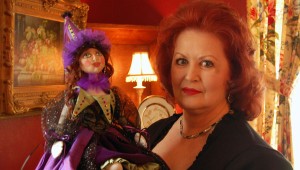 Anita Williams with a cloth doll she made.

In a studio in her home, Williams makes cloth dolls, porcelain dolls and clay dolls from scratch. She also specializes in refurbishing old dolls.

She learned her skills from master doll maker Jack Johnson.

“I can make a clay doll and a cloth doll, but what I really love to do is wardrobe them,” Williams said. “That’s my favorite part.”

Williams collects any kind of potential doll clothing material she can get her hands on, including evening gowns and silk blouses from thrift stores. Her signature feature on her dolls is the netting she uses in almost all of their clothing.

Linda Boothe, the Girl Scout troop leader, said her troop has learned a great deal from Williams over the course of the doll program.

“The biggest thing they’ve learned through this program is organization and how you do things step by step,” Boothe said.

She hopes the program will have a lasting impact on the girls.

“Little girls now don’t play with dolls like they used to,” she said. “Some of these girls are going into middle school and junior high now and we’re trying to keep them involved with dolls.”

Girl scout Katie McDowell said she hopes to have a collection even bigger than Williams’ some day.