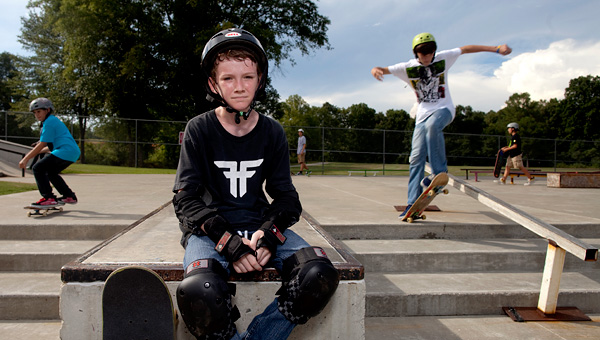 Eleven-year-old Clark Mays, at Veterans Skate Park in Alabaster, hopes the city of Chelsea will build a similar park.

CHELSEA — Eleven-year-old Clark Mays surprised the Chelsea City Council at the July 6 meeting when he came forward to do a presentation on why the city should build a skateboard park.

Mays, a student at Hilltop Montessori School, said he had never been to a City Council meeting before, but feels so strongly about getting a skate park in the area that he thought the council should hear his ideas.

“I’ve done a lot of presentations in schools,” he said. “So I felt comfortable with presenting. I had never done anything for the skating community before so I thought this would be a good opportunity.”

In his presentation to the council, Mays described the need for a skate park, included safety statistics about the sport and even presented ideas for ways to fund the project.

His funding proposal included applying for a grant from the Pepsi Refresh Project and the Tony Hawk Foundation, which supports the building of public skate parks.

Mays said the skate park is a matter of safety for kids in Chelsea.

“It would get kids off the street,” he said. “When kids don’t have a place to skate, they skate on the street. A lot of kids skate behind the Winn-Dixie, and that’s destruction of property and it gets them in trouble.”

Chelsea Mayor Earl Niven said he and the council were very impressed by Mays’ presentation.

“You could not have asked for a better presentation,” Niven said. “With the economy like it is, we can’t get into many capital projects right now. But we will consider his request.”

Peter Karvonen, owner of Faith Skate Supply in downtown Birmingham and resident of Alabaster, said most of his clientele comes from Shelby County.

“A lot of my customers come from out that way and they’re requesting somewhere to skate in that area of all places,” he said.

Right now Alabaster has the closest skate park in the Birmingham area, he said. If kids can’t make the drive to Alabaster, they skate in the street or in make-shift skate parks in downtown Birmingham, which is where the most injuries occur, he said.

“When it comes down to it, swimming, bicycling and basketball all have way more injuries in terms of ER visits,” he said. “The injuries that do happen on skateboards are usually because of cracks in the road, rocks or kids getting hit by cars. That wouldn’t happen in a skate park.”

A skate park would benefit the whole community because people of all ages and backgrounds like to skate, Karvonen said. He thinks if city officials knew how in demand another skate park was, they’d be more willing to build one.

“This is Alabama, they don’t realize how popular skateboarding is,” Karvonen said. “Every municipality probably has 20 tennis courts, but skateboarding is much more popular than tennis among kids. Even kids who play sports are skating in their off time in their own neighborhood.”

Mays and Karvonen have decided the next step to achieving a skate park in Chelsea is to start a petition to deliver to the City Council.

“They were not 100 percent into the idea,” Mays said. “I think we just need to give them another push so they can see how many people want this.”

Karvonen said it might be hard work to get a skate park, but it would be worth it.

“The easiest way to get a skate park is for a kid to get hit by a car,” he said. “We don’t want to wait for that to happen.”