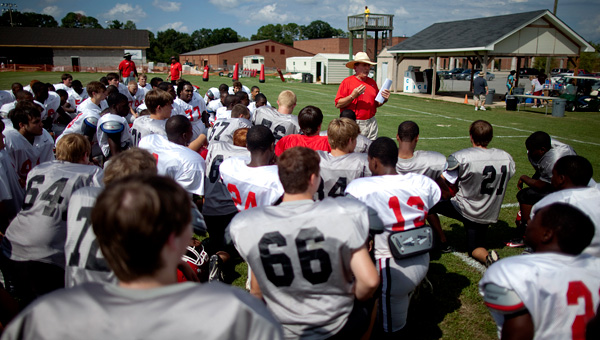 Alabaster residents and Thompson High School parents will have plenty to be proud of this year, according to first-year THS football coach Bruce Hill.

Hill, who took over as THS head coach last May after serving as an assistant coach at the school and head coach at Clay-Chalkville, has been working throughout the offseason to improve his team’s performance and mentality both on and off the field.

Because Hill took over the team at the end of the school year following a one-win season, he and his coaching staff have been hard at work all summer preparing for the upcoming season, which begins Aug. 27 against Stanhope Elmore.

“The first part of my involvement with the program was our summer strength and conditioning,” Hill said. “We wanted to change the mindset of our team, because losing can become contagious. 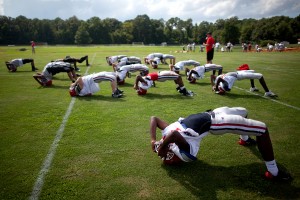 “They appear to have bought into the program,” he added. “Obviously, we aren’t where we want to be or where we need to be yet, but we are getting there.”

Although winning games is important to any football coach and team, Hill said he is not completely focused on the number of wins he tallies during his first season as head of the Warriors.

“You never hear about how many wins or losses we are expecting this year, or how many we have had in the past,” Hill said. “We are talking about kids representing Thompson High School and the Alabaster community in a class way.

“No matter what happens on the field, this team is always going to represent our community well,” Hill added.

Hill, his players and his coaching staff are preparing to face stiff competition in Class 6A, Region 6 this year, which includes match-ups against schools like Hoover, Vestavia Hills and Spain Park.

“There’s no doubt that Region 6 has the reputation of being the SEC or NFL in the state of Alabama,” Hill said. “But we feel like, as we look at the schedule, if our guys continue to work hard and be coachable, we can be competitive every single Friday night.

“I guarantee our players will play extra hard from the beginning of the game to the end,” Hill added. “We are working on instilling that personal accountability aspect in every player. You will see them work hard this year, and you will see a disciplined team.”

As the season draws near, Hill said he is sharing a “buzz of excitement” with his team and the community.

“I have been coaching and teaching 28, 29 years now. I have been in a lot of situations, and I can say that I am as excited for this season as I have ever been,” Hill said. “People are really ready to get behind a team the community can be proud of.

“I believe God puts us in certain places at certain times. God put me here and best prepared me to move forward with the support of the school and the community,” Hill added. “I feel blessed. I’m the luckiest guy in the world.”

Students learn from seed to plate