Food masters in the making 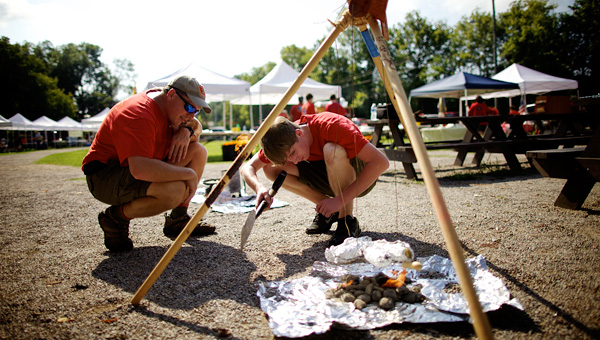 Michael Trahan, center, and Matt Owen work to cook corn on the cob using a tripod system during the cookout Aug. 21 in Helena. (Reporter Photos/Jon Goering)

The savory smell of meat on the grill filled the air Aug. 21 at the Helena Market Days Cook Off as two Boy Scout troops went to head to prepare the best meal.

The cook off began at 9 a.m. at the Helena Amphitheater when three mystery meat ingredients were revealed to the teams — Troop 2 and Troop 532.

Both teams had an hour and a half to create a dish including ground beef, bacon and jalapeño sausage provided by DJ Meats.

The ten Boy Scout members of each team arrived as early as 6:30 a.m. to set up their equipment and start brainstorming recipe ideas, said Troop 532 Scout Master Louis Vildidill.

“They’re learning to cook more than just basic meals,” Vildidill said. “This is a step above beanie weenies.”

Both teams had the opportunity to purchase fruits and vegetables from the Helena Market Days before the meat selections were reveled. 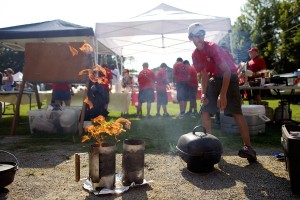 While members of his troop chop vegetables, Kyle Edsall works in the back getting the charcoal ready for cooking during the Boy Scout Cookoff Aug. 21 in Helena.

For the final product, each presented the judges with a main course, a side dish and a dessert.

Domenick Simonetti, 16, led troop 532 as they prepared their meal, overseeing other scouts as they sliced and diced vegetables and browned the meat.

“I’ve cooked all my life,” Simonetti said. “It’s just something I really love to do. I’m confident we’ll win.”

Troop 532 presented as their final meal roasted bell peppers filled with ground beef, jalapeño sausage and rice along with lemon-herb potatoes and squash followed by peach upside down cake for dessert.

Troop 2 was led by 15-year-old Drew Romanowski who said his troop came up with their recipe ideas on the spot.

“Once we got our meats, we just came up with something,” he said.

Troop 2 is the reigning champion from last year’s cook off. For judging this year they produced a beef and sausage meatloaf along with a vegetable medley side dish followed by fresh peach cobbler. 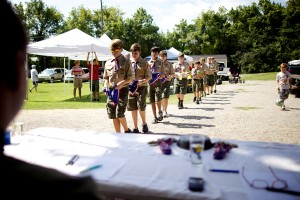 Members of Boy Scout Troop 2 march in line to present the cookoff judges the meal they prepared.

A panel of local chefs and food experts judged the meals based on taste, use of market produce, use of mystery meats, presentation and safety and sanitation.

After tasting both meals, the judges awarded Troop 2 with the winner’s skillet for the second year in a row.

All scouts who participated were awarded medals.

“Troop 2 had more flavor,” said judge Nick Dimario of Belly Fillers. “In the vegetable medley, you could taste the jalapeño and the dessert was more moist. Once again, food quality reigns supreme.”

Hal Woodman, coordinator of this year’s cook off, said in the future, they plan to host more cooking competitions at Helena Market Days.

Next market season, they’d like to see adult teams, high school youth groups or even Boy Scouts vs. Girl Scouts.