Coal mine company store paid its due 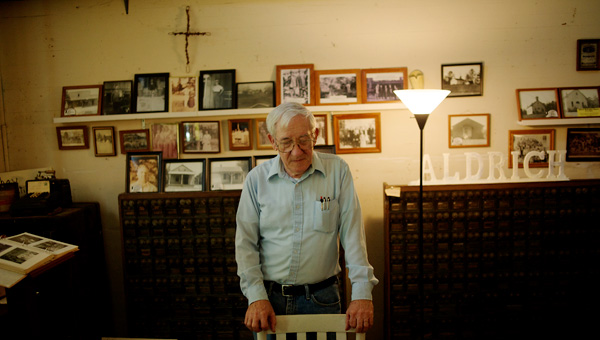 Henry Emfinger pauses in the Montevallo Coal Mine Company Store, part of the Aldrich Coal Mine Museum. (Reporter Photo/Jon Goering)

On the outskirts of Montevallo, in what remains of the small coal mining community of Aldrich, a local historian is doing all he can to preserve the culture and history of a time passed.

Henry Emfinger, owner of the Aldrich Coal Mine Museum, had a success this summer when the Montevallo Coal Mine Company Store was added to the Alabama Register of Landmarks & Heritage in July.

The store may be the last mining company store in the state, according to the Alabama Historical Commission.

It was built in 1928 and now houses the bulk of the coal museum that Emfinger runs.

Emfinger, whose father was a coal miner for 30 years, grew up in Aldrich. In fact, Emfinger took many of the historical pictures on display in the museum when he was only 12 years old; using an old box camera he got from Santa Claus.

Now he has made it his personal mission to preserve the Aldrich area, including the company store.

In its heyday, the store was a central part of the mining community, Emfinger said. The miners were paid in clackers and scripts, a currency that could only be used in the company store.

When they weren’t buying groceries or goods, the miners used the store’s large front porch as a social gathering place, Emfinger said. 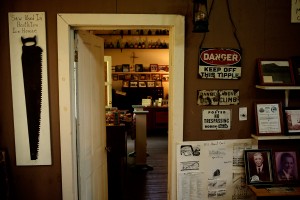 A view of the inside of the museum. (Reporter Photo/Jon Goering)

“The miners would sit out there and play dominos and play dice on porch,” he said. “Well, Mr. Aldrich said ‘I’ll show them’ and he tore most of the porch off so they couldn’t do that. He was a party pooper.”

“It still breaks my heart every time a house goes down,” Emfinger said. “Either burned down or torn down.”

Emfinger started the museum in 1989 and has recovered many of the town’s original artifacts including the store’s elaborate cash register and the old post office boxes.

“I’m so thankful for all the things that came back home,” he said.

Near the museum, the mouth of the mine and air ventilation system coming out of the ground can still be found. Emfinger’s dream is to create an Alabama Coal Mine Industry Park in this area, with walking trails around the old mine.

In the meantime, Emfinger gives museum guests a guided tour through his own simulated coal mine located inside the company store. 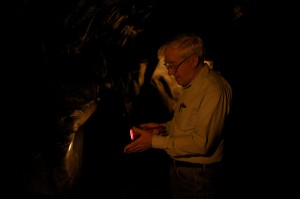 Henry Emfinger gives a tour of the replica mine at the museum. (Reporter Photo/Jon Goering)

Guests can relive another era through Emfinger’s stories of old Aldrich and his passion for coal.

“God created the heavens and the earth and when he did that he made coal,” Emfinger said. “And I believe that.”