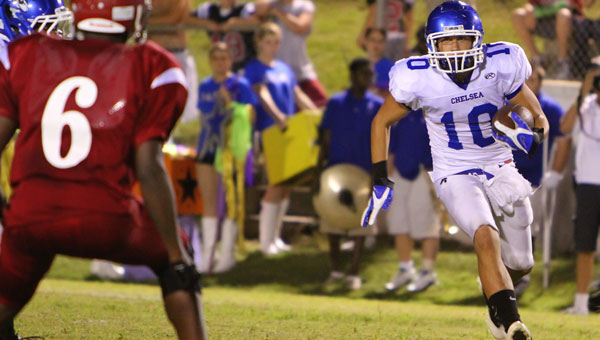 Chelsea High School (1-0) opened its season in style with a 28-13 road win over Brookwood.

Junior quarterback Jake Ganus proved to be a nightmare for the Brookwood defense, running for 103 yards and two first-quarter touchdowns while throwing for 115 yards.

“I thought we played hard,” Chelsea coach Wade Waldrop said. “I thought the kids adjusted well to what we were asking them to do.”

The Hornets piled up 320 yards of total offense while the defense kept Brookwood in check, limiting the Panthers to 135 total yards and one offensive touchdown — a 15-yard touchdown pass on fourth-and-goal.

The Hornets gave up a special-teams touchdown as well, as Brookwood returned a kickoff for a touchdown following Chelsea’s first scoring drive.

“We have a lot of work to do offensively and defensively,” Waldrop said.

The Hornets will look to stay undefeated next week, as they travel to open region play at Sylacauga Sept. 3.