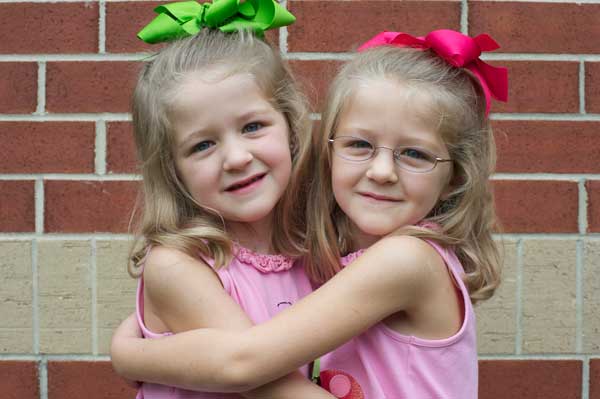 She hasn’t always been sure however that she wanted to be a twin.

“Maggie went through about a year of saying, ‘I am absolutely not a twin,'” grandmother Linda Lowery said. “Then one day, ‘Okay, I’m a twin again.”

The girls’ mother, Michelle Hicks, said she was ‘totally shocked’ to discover she would be the mother of multiples.

Twins were in her family two generations before her, but that didn’t limit the surprise. She was 11 weeks along when the doctors proclaimed the news.

“We just couldn’t believe it,” she said. “Its weird because my best friend from school has twins and so do four other people from my high school class.”

She said once she found out she was having twins she literally began seeing them everywhere.

Hicks put the girls in their own classes.

She wanted them to have their own individuality. The girls fight like all sisters do, Hicks said, but they’re close.

When the girls first began talking, they even made up their own nickname for each other – ya-ya. They wouldn’t call their mother or father anything special but they always would refer to each other as ya-ya.

“They are so much fun — you never know what’s next with them,” she said. “Their personalities have flipped flopped several times.”

Some things haven’t changed. Maggie’s favorite color has always been purple (Gracie goes back and forth from pink to blue) and Gracie has an immensely inquisitive nature. Hicks said Gracie wants to know how everything works.

Hicks said she couldn’t wait to see what other unique traits grow along with the girls.

BY SAMANTHA HURST The excitement of discovering your baby’s sex races through every new parent’s mind, but when you know... read more