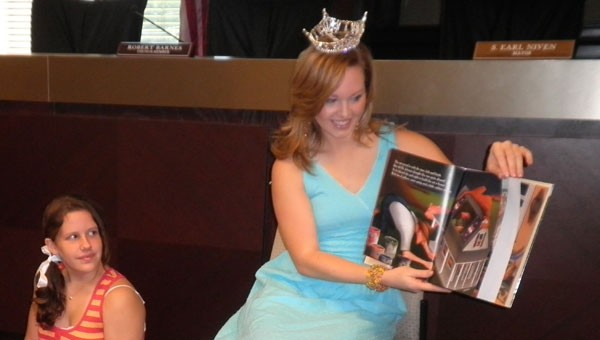 Miss Shelby County Megan Picklesimer reads to a group of kids as part of her literacy platform.

The Miss Shelby County Pageant is sponsored by the Vignette Club of Columbiana, the oldest pageant affiliated with the Miss America Organization (MAO) in Shelby County, celebrating 24 years.

Picklesimer’s platform is “Literacy Matters, Life can be a Book.” Journaling since third grade, Picklesimer calls her diary “D.” She writes in “D” every night and hopes to publish it as a book.

A journalism major at Troy, Picklesimer was mentored since a toddler by her grandmother Claire Gross, who has authored several books for her grandchildren and also with Picklesimer.

As a young girl, Gross and Picklesimer penned their Binky books.

Binky was a caterpillar and experienced life journeys through these books.

An avid reader, Picklesimer would spend summers at the library choosing books to read. Literacy became her passion and her platform for she knows that writing and literacy are essential to achieve in life.

There are over 19,000 functionally illiterate people in Shelby County alone.

Picklesimer plans to have several events to help raise funds for the Children’s Miracle Network, the charity that the MAO supports to raises funds for our Children’s Hospital.

She plans to visit all Shelby County libraries and hopes to really make a difference during her reign.

Her family, which she calls the Pickles, has been supportive of her goals. She is the daughter of Suzanne and Jeff Picklesimer of Chelsea.

Picklesimer will graduate in May and hopes to be a broadcast reporter in television after achieving her master’s in education.