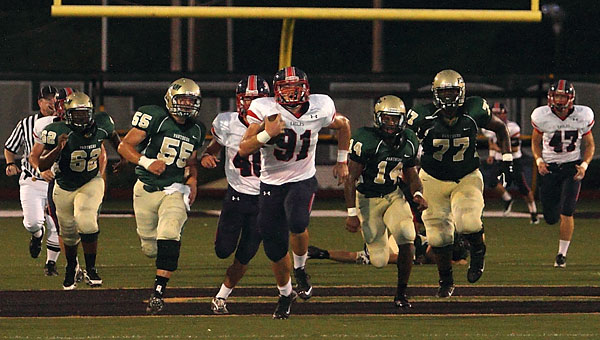 “We took a step forward tonight. We were able to consistently move the ball,” said Pelham head coach Brett Burnett. “Like I said last week, it’s a process. The kids bounced back and showed a lot of class.

“(Quarterback Gray) Cato is getting better every week,” Burnett added. “There are no easy games in this league, so it’s only going to get harder from here.”

Pelham, which was playing its first home game of the season, jumped on the scoreboard first in the opening series of the game when Reed Bright reeled in a 25-yard pass from Cato in the end zone.

However, the Eagles answered back early in the second quarter when running back Bradley Bostick ran the ball in from 1 yard out to score. Oak Mountain’s Mitch Mathias added the extra point, tying the game at 7-all.

Oak Mountain’s first scoring drive came after the Eagles’ Austin Moro recovered a Cato fumble and ran it back 69 yards to the Panther 3 yard line.

The Eagles jumped ahead a few series later when Cato was sacked in the Panthers’ end zone, giving Oak Mountain a safety and putting them up 9-7.

Oak Mountain’s lead was short-lived, however, as Pelham running back Dominique Harris scored a few plays later on an 8-yard run into the end zone.

Haynes added the extra point, giving the Panthers a 14-9 lead.

Pelham lit up the scoreboard again with 2:48 left in the first half when Ty Pierce reeled in a 45-yard pass from Cato in the end zone. Haynes added another point, putting the Panthers up 21-9.

Pelham pulled away even more with less than a minute left in the first half, when Pelham defensive end Nick Terrell recovered a botched Oak Mountain snap and ran it in 44 yards to score.

Haynes again added the extra point, sending the Panthers into the locker room with a 28-9 lead.

Pelham began the second half of play by adding three more points on a Haynes 31-yard field goal, giving the home team a 31-9 lead.

On the next play, Pelham defensive back D.J. Johnson recovered an Eagle fumble, setting the Panthers up first-and-10 on the Oak Mountain 11 yard line.

A few plays later, Bright caught a 9-yard pass from Cato and reached forward into the end zone as he was tackled.

Haynes again added three points to put the Panthers up 38-9 late in the third quarter.

Oak Mountain answered Pelham late in the fourth quarter, when Bostick broke out to run 42 yards into the end zone.

Mathias added the extra point to bring the game to 38-16.

On its next possession, Oak Mountain drove down to the Pelham 26 yard line and was poised to score again.

However, Pelham stopped the Eagles when Panther defensive end Wil Holsomback recovered an Oak Mountain fumble, clearing the way for the Panthers to knee the ball to run out the clock.

“Our inability to move the ball put our defense in a bad spot,” Harris said. “They had to stay on the field a lot. We just have to do a better job of moving the ball.

“We will go back this week and look at a lot of things. We need to eliminate a lot of mistakes,” Harris added. “We made a lot of errors tonight that stemmed from a lack of discipline.”

Pelham, which is now at 1-1, will face Mountain Brook High School at home next Friday night.

By MARK WINDHAM / For the Reporter Kingwood Christian School came out on a mission Sept. 3 against visiting Coosa... read more