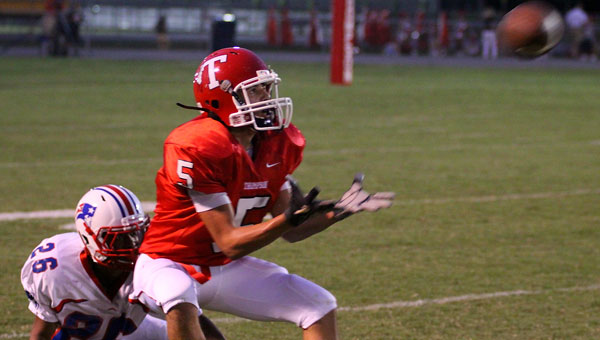 Looking to start the Class 6A, Region 6 schedule with a big home win, the Thompson Warriors saw their lead disappear in the fourth quarter against Homewood.

A missed field-goal attempt with 22 seconds remaining left Thompson one point short as the Homewood Patriots escaped with a 22-21 victory Sept. 3.

The Warriors’ defense faced a Homewood offense that scored 50 points in its season opener.  The Thompson defense contained Homewood’s running backs and allowed only one rushing touchdown.  The key for the Patriots was big passing plays and capitalizing on Warriors’ penalties.

A 32-yard pass from Stephen Baggett to Aaron Earnest gave the Patriots a 6-0 lead after Thompson blocked the extra-point attempt.

Thompson (0-2, 0-1 in Class 6A, Region 6) marched its way down to the Patriot 19-yard line on its next series before a field-goal attempt sailed just wide.

Thompson’s Chris Cooper fielded a punt and returned it 30 yards to set the Thompson offense in motion on its next series.  Eleven plays later, Cooper took the handoff from Trey Matherson and scored on a 7-yard touchdown run. Matt Nall’s extra point gave Thompson a 7-6 lead.

The Patriots added a Tray Holman field goal before the half to carry a 9-7 lead into the second half.

Thompson fumbled the ball to Homewood on their own 45-yard line early in the second half.  Three plays later, the Patriots returned the favor and Avery Hale picked the ball up and rumbled 60 yards for a touchdown. Nall’s extra point was good and gave the Warriors a 14-9 lead.

Hale blasted through the line and blocked a field-goal attempt later in the third quarter.

Later in the second half, Demarcus Threatt bowled over a host of Patriots as he carried the rock 65 yards for a score.  Nall converted the extra point and Thompson held a 21-9 lead.

Those big plays were offset with big mistakes in the fourth quarter as the Patriots used 45 free yards due to Thompson penalties to go 88 yards for the score on their very next drive.  After a Thompson drive stalled out, the Patriots again used their passing attack to move the ball into the red zone, where Earnest caught his second touchdown pass of the evening.  After a failed two-point conversion attempt, the Patriots held a 22-21 lead.

Thompson’s final drive carried them to the Homewood 25-yard line, where the Warriors would attempt their second field goal of the evening with the hopes of taking the lead with less than a minute remaining.  Like the first, the ball drifted wide left and just missed the upright sealing the win for the Patriots.

“Homewood is a great program, but tonight we just beat ourselves,” said Thompson coach Bruce Hill. “We are going to get our share of victories, but we have to ‘seize the moment’ when we have the chance.”

Cooper finished with 140 yards on 26 carries.

The Warriors travel to Vestavia Hills for another Class 6A, Region 6 matchup Sept. 10.