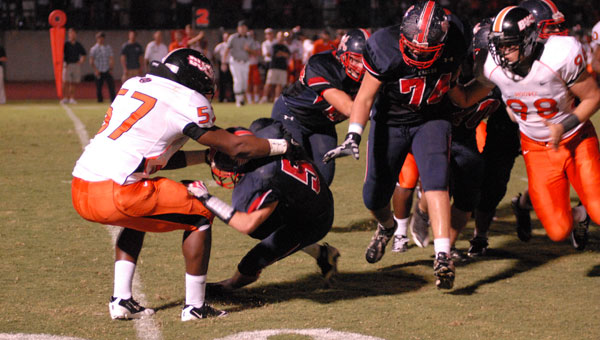 Oak Mountain running back Bradley Bostick is brought down by Hoover defender Eric Sledge in the Eagles' 60-0 loss to the Bucs in a Class 6A, Region 6 battle Sept. 10. (Reporter Photo/Davis Potter)

NORTH SHELBY — With Oak Mountain High School searching for its first win of the season, head coach Jeff Harris didn’t want his team thinking about its opponent leading up to the game on Sept. 10.

That task is easier said than done when the counterpart is Hoover High School, the top-ranked team in Class 6A.

“The main thing that we preached wasn’t so much anything about Hoover. It was about us,” Harris said. “Obviously, we’ve got a lot to work on. We’ve got a lot of obstacles to overcome, but I’m proud of the guys for continuing and persevering.”

The Eagles didn’t have any other choice after falling behind an early 14-0 hole midway through the first quarter by way of Hoover’s quick-strike offense.

The Buccaneers used two drives and 10 plays to get on the scoreboard early, and each ended with short touchdown runs by running back Justin McArthur.

Hoover then turned to the big-play ability of wide receiver Jaylon Denson to pad its lead.

On the next two possessions, quarterback Ryan Carter connected with Denson on a 14-yard pass in the right front corner of the end zone and a 42-yard bomb down the left sideline to give the Buccaneers a 29-0 lead with 3:29 remaining in the opening quarter.

Oak Mountain was victimized by the big play for a majority of the first half, as the Buccaneers had five plays of 20 yards or more in the first 24 minutes.

Hoover was able to take advantage of a certain defensive alignment that head coach Josh Niblett and his staff saw from the Eagles early on.

Denson, an Auburn University commit, hauled in six passes for 145 yards and two touchdowns in the first half.

Hoover used two more touchdowns on the ground and a 50-yard punt return for a touchdown by junior Caleb Sims with 9:13 left in the second quarter to build a comfortable 53-0 halftime lead.

One bright spot for the Eagles was the play of senior running back Michael Jointer, who grinded out 65 yards on 18 carries against a Hoover defense that has yet to give up a point this season.

Despite the lopsided result, Harris said the plan for his team is to continue to press forward.

“Now that we’ve got this one behind us, we’ve got to look forward and just focus on getting better every single day,” Harris said.

Oak Mountain will try to get in the win column with a visit to Spain Park Sept. 17 while the Buccaneers will travel to Thompson for another Class 6A, Region 6 tussle.