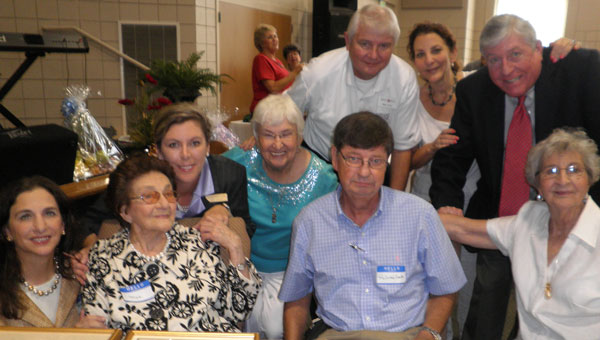 Sonya Lefkovits was honored at the South Shelby Chamber luncheon on Aug. 7 for her many years of service to Shelly County.

Called Miss Sonya by most, “Sunny” by her close family and friends, and Mama2 by this writer, Lefkovits has been a fixture in Columbiana since her marriage to husband Norman in 1947.

The Lefkovits family ran the Columbiana Leader on Main Street , which her father-in-law began in 1896. The store closed in 1980 as Lefkovits became the primary caretaker of her beloved husband until his death in 1996.

The Lefkovits had two children: Norman Jr. and Marsha, who grew up in the family home on Main Street that “Mr. Max,” Norman’s father, bought in 1902.

“My Norman was born in this house and he died in this house,” said Lefkovits. “Not many people can say that today.”

Lefkovits’ legacy to our community is great. Her influence is everywhere, including: Charter member and 2nd President of the Vignette Club; chairman of the Columbiana Public Library Building Committee; First Ambassador for the South Shelby Chamber of Commerce; founding member of the Columbiana Merchants and Professional Association; and Honorary Member of the Shelby County Historical Society.

At the Chamber luncheon, Busy Hand’s owner Richard Cook, Stacy Walkup, executive director of the Chamber, and Billy Jones of Bryant Bank spoke of her many accomplishments.

“Miss Sonya is a special woman,” said Cook. “She is the Queen of Columbiana.”

Walkup presented Lefkovits with four plaques of recognition for her many years of service and dedication to the vitality of South Shelby County, including commendations from the Alabama House of Legislature by Rep. Mike Hill; the 111th Congressional Record by Senator Richard Shelby; the South Shelby Chamber of Commerce for faithful and dedicated service; and a Certificate of Appreciation from the Columbiana Merchants and Professional Association.

Lefkovits spoke from the heart as she thanked all who came to share this special day with her. “All of you in this room are my folks,” Lefkovits said.

Three days after the luncheon, on Sunday, Aug. 8, Lefkovits flew by medical jet to her new home in California to live with her daughter, due to her declining health.

Miss Sonya will be greatly missed by our community, especially by this writer. I love you, Mama2.