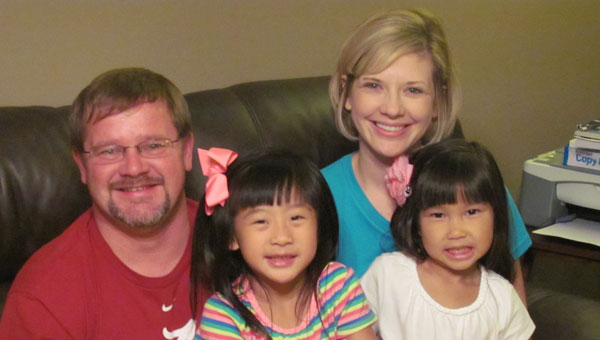 Raised in Pleasant Grove and educated at Samford University, Stephanie Ragland is now a nursing clinical instructor at Samford and a part-time nurse.

She met her husband Greg through a relative connection. Greg Ragland, a Centerville native, is an Auburn University grad but a big University of Alabama fan.

Two devoted Christians, the Raglands wanted what everyone else wants: a home, family, church, secure jobs and years of happiness. Both had lost a parent in their teens but were very secure in their faith. When a tragic miscarriage represented possible future complications for the couple, adoption came to their minds.

On a friend’s advice, first they began looking for a child to adopt in Guatemala. After months of screening and paperwork, they were told Guatemala was tightening adoption procedures and the Raglands did not qualify. They were told China was the most stable international outlet for adoption at that time.

The Tiananmen Square incident happened when Stephanie was 14 and had given her a generous heart toward the Asian people.

Adoption procedures started with Villa Hope in March 2005. After 16 months of waiting, they became aware of a ministry in China called Annabelle’s Wish. The agency specializes in the “waiting child,” meaning a child with special needs.

In September 2006, pictures were sent along with the “needs” of each child.

Upon their return to the United States, Stephanie felt very strongly that they still had another daughter waiting in China.

She asked Greg about another baby and his reply was, “If you can get someone to give us $25,000, it’s great with me.”

When she ate dinner with her parents one night, she mentioned it to them. Later that night her Dad called her to say he was selling some land so they could start adopting. God’s hand in this was that her Dad had not approved of international adoption from the beginning, but God had turned his heart into that of a proud grandpa.

Though these girls are only three months apart in age, everyone thinks they are twins.

As a teacher of sixth-grade math, a school bus driver and the youth minister/associate minister at Community Baptist, Greg Ragland is easy- going, funny and totally enthralled with his beautiful wife and children.

A son, Charlie, is waiting for the ton of paperwork to be completed so that he, too, may join this family.

Camping at Tanniehill Park and “anything Disney” are favorites of the girls.

Raised in Pleasant Grove and educated at Samford University, Stephanie Ragland is now a nursing clinical instructor at Samford and... read more