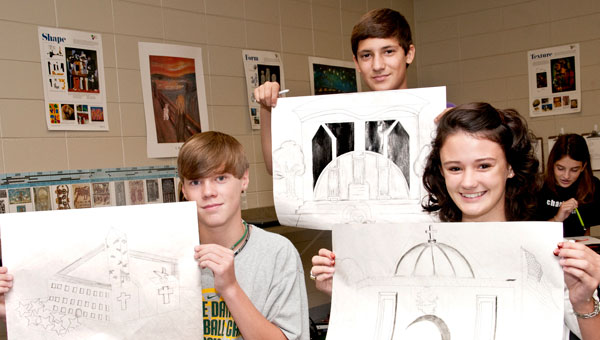 Eighth grade art students of Lindy Tubbs at Helena Middle School recently watched a CBS documentary entitled, “What We Saw,” about the events of Sept. 11, 2001.

In preparation for their project to design a memorial structure to be placed at Ground Zero in New York City, the students shared their own memories of that day — even though they were only 5 years old at the time.

“I was getting ready for kindergarten that morning. My dad is in the Army and travels frequently on business to his office near the Pentagon. He called my mom and told her, ‘I’m OK. I’m safe. Turn on the news.’ ”

“My mom turned on the news just as the second plane hit the tower and she cried,” Ashley Traylor remembers.

Twins Greg and Logan Barnett told me their definition of freedom is “not having anyone threaten your way of life.” The boys’ uncle, Sgt. 1st Class Mike Barnett, who previously served in the Persian Gulf and Panama, recently returned from Iraq.

In designing their vision of the memorial, each student did research via books and the Internet then drew sketches.

They discussed other national memorials and their significances and locations. Several students referenced the shape of France’s Arc de Triomphe in their design.

Final drawings required the use of two or three-point perspective plus shading and shadowing.

“We had to draw so many angles — I thought the shading would be hard, but it turned out to be easier than I expected,” he said.

Seth Key called his design “The Missing Piece.” It references the shapes of the Pentagon and Washington Memorial in its elements and the ground of the entry and courtyard is executed to look like a waving American flag.

“This project really got my students interested in recent history and current events. Every day they came in with new questions about the events of that day or told me about something they had seen on TV or read on the Internet,” Tubbs said. “I was really impressed with the reverence these 13 and 14-year-old students showed towards the victims of 9/11 in their designs.”