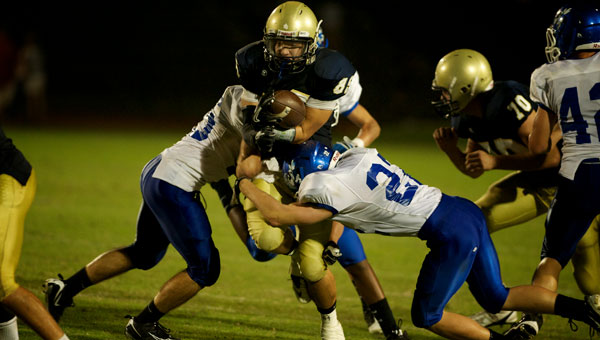 NORTH SHELBY – The Briarwood Christian School defensive line earned a reputation as one of the best in the state through the first three games of the 2010 season.

The Lions’ defensive front didn’t do anything to harm that reputation in a 41-7 win over rival Chelsea in the Shelby County Reporter Game of the Week.

Led by seniors Caleb Ward, Tyler Whitworth and Thomas Hess, Briarwood kept Chelsea’s trio of impressive runners — Julius McCall, D.J. Washington and Jake Ganus — out of the end zone and the defensive line put an end to a key 13-play drive by the Hornets to start the third quarter with a stop on fourth down.

Meanwhile, Briarwood quarterback Ben Craft scored on three short touchdown runs to give the Lions’ offense all the points it would need. Canon Smith added a 12-yard touchdown reception from Craft, Matthew Furuto scored on a 1-yard run and Chad Davis returned an interception 30 yards for a touchdown for good measure.

Chelsea coach Wade Waldrop, who also saw two drives by the Hornets stall in Briarwood territory in the first half, said the Lions’ defensive stop on fourth down on the opening drive of the second half was the turning point in the game.

“That was huge,” Waldrop said. “The credit goes to Briarwood. They did a great job defensively.”

Craft put the first points on the scoreboard for the Lions with his 2-yard touchdown run with 4:55 remaining in the first quarter. Wilson Whorton, who converted 4-of-5 point-after attempts, nailed the extra point.

Smith reeled in his 12-yard touchdown reception from Craft on the first play of the second quarter to extend the Briarwood lead to 14-0.

Craft added  a 1-yard touchdown run with three minutes left in the first half to extend the Lions’ lead to 21-0. Following an interception by Jake Campbell, the Hornets put their first points on the scoreboard with 56 seconds remaining in the first half when Ganus threw a 24-yard scoring strike to Campbell down the middle of the field.

After the fourth-down stop by the Lions on the opening possession of the third quarter, Craft led Briarwood on an 8-play scoring drive, capped by Furuto’s 1-yard touchdown run, to push the lead to 28-7.

Later in the third quarter, Devin Bowman returned a Chelsea punt 53 yards to set up Craft’s final touchdown, a 3-yard scoring run, to push the Lions’ lead to 34-7.

Davis capped the scoring for Briarwood with his 30-yard interception return for a touchdown.

Yancey credited Bowman’s punt return and Davis’ interception return for helping the Lions extend their lead in the second half.

“Those are the kind of plays that bust the game open,” Yancey said.

Ganus completed 14-of-26 passes for 98 yards with a touchdown and two interceptions. Ganus also led the Hornets in rushing with 56 yards on 13 carries. Campbell caught six passes for 58 yards and a touchdown.

Waldrop said his players have to put the loss to Briarwood behind them quickly.