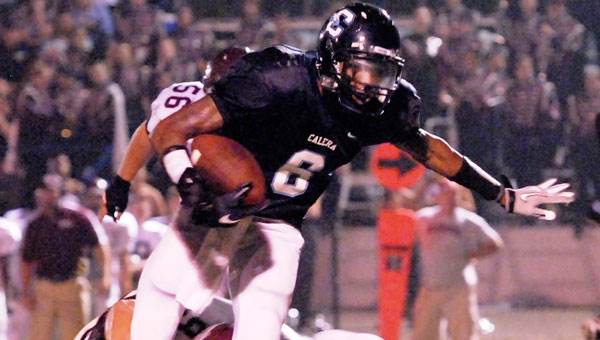 Eugene Rodgers carried the ball 24 times for 174 yards and a touchdown for the Eagles. Quarterback Zach Reneau went 12-for-18 for 131 yards with two touchdowns and an interception.

Trailing 27-12 after three quarters, Calera worked its way back into striking distance with a 10-yard touchdown pass from Reneau to wide receiver Ronnie Clark with 9:27 left in the fourth quarter. The Eagles two-point conversion attempt was unsuccessful.

After stopping the Elmore County offense again, the Eagles drove the ball to the Panthers’ 19-yard line to set up Tinajero’s game-winning field goal attempt. Tinajero connected on the 36-yard field goal with 1:18 to play, lifting the Eagles to a one-point win.

Davis finished with six catches for 133 yards and two touchdowns.

Calera returns to action Sept. 24 in a non-region game against Jemison. Elmore County will travel to Tallassee on the same date.