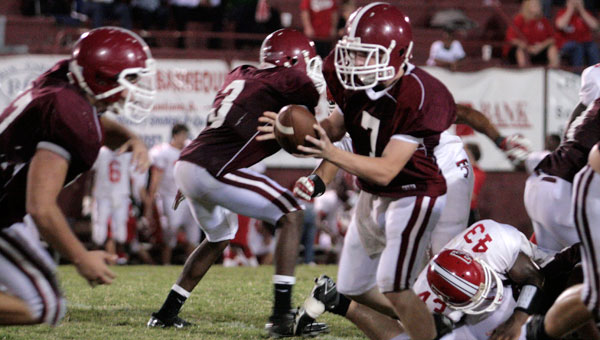 COLUMBIANA — The Shelby County Wildcats put up a fight to get their first win of the season as they beat Talladega 22-19 on homecoming night Sept. 17 in Columbiana.

Shelby County came out of the locker room firing on all cylinders, scoring on their first two drives of the game, including a 54-yard touchdown run by junior running back Denzel Williams in the first two minutes of the game.

Talladega answered back quickly with a 34-yard touchdown pass early in the second quarter. The Wildcats went into the locker room at halftime with an eight-point lead.

Talladega came out at in the second half and kept the momentum going, driving the ball 66 yards down the field to score and narrowing the Wildcats’ lead to one point.

The Talladega defense forced a fumble on the next drive to give the ball back to its offense, and after a slew of penalties, Talladega pounded it in for another touchdown to take a five-point lead early in the fourth quarter. The Tigers scored 19 unanswered points before Shelby County had a chance to take back control of the game.

With a little over 10 minutes to go in the fourth quarter, Shelby County was down 19-14 and started its drive from its own 20-yard line. Junior fullback Brent Wooley pushed the Wildcats upfield play-after-play. After three first downs, the Tigers defense forced two plays for a loss and an incompletion to force a crucial fourth down. With the game in his hands, freshman quarterback Ty Proctor threw a deep pass to Denzel Williams for a 30-yard gain and a first down to keep the drive going

“We were asking for a miracle,” said Shelby County coach Ryan Herring. “We had to make a play, and he needed to find Denzel.”

Williams scored on the next play with a 12-yard run to take a one-point lead over the Tigers. After a two-point conversion, Shelby County had a three-point lead with 3:50 left in the game.

The Wildcats’ defense stepped up as Talladega started its drive. After giving up a few yards, Talladega had a short fourth down and Shelby County forced an incompletion to take the ball back.

After a few plays to run the clock down, Talladega got the ball back with 32 seconds left and a chance to drive down the field and tie the game. On the first play of the drive, Denzel Williams came up with an interception to seal the first victory of the season for the Wildcats.

Shelby county finished the game with 281 total yards, with 209 of those coming on the ground.

Denzel Williams finished the game with 174 total yards, with 69 of those yards coming in the air from Ty Proctor.

Shelby County will head to Southside-Gadsden for a non-region game Sept. 24.