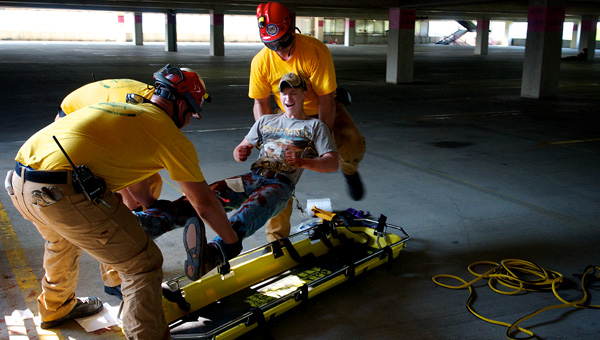 Helena Fire Explorers member Andy Driver gets attended to by a Mountain Brook Fire and Rescue team during a training excercise on Sept. 19 at the Riverchase Galleria. (Reporter Photo/Jon Goering)

HOOVER — In the Riverchase Galleria South parking deck Sept. 19, a Helena teenager lay in a stairwell covered in fake blood, with a steel bar tied to his thigh as if impaled. Andy Driver, 17, yelled in agony as first responders made their way through the parking garage, assessing victims along the way.

Driver and the other victims were volunteers participating in a training exercise for area police, fire and emergency management agencies. The exercise simulated the effects of a tornado strike on Hoover, testing the agencies’ cooperation, communication and response, said Captain James Coker of the Hoover Police Department.

“It’s a great chance for us to practice,” Coker said. “This type of exercise is bigger than any city in the state. We have to have mutual assistance.”

The training exercise allowed the agencies to practice their response if a real-life disaster struck the county, Coker said.

“We live in Alabama, you never know, this could happen at anytime,” he said. “With this many agencies, communication is key.”

The mall’s South parking deck was the scene of the disaster for training purposes. Volunteer victims were spread throughout the garage, using make up and fake blood to simulate injuries from tornado debris. 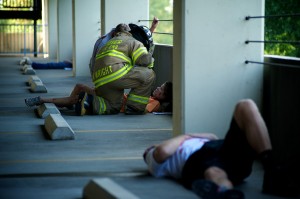 Volunteer "victims" wait for treatment of their injuries in a Riverchase Galleria parking garage during a training exercise Sept. 19 in Hoover.

“I wanted to come out to help, he said. “It’s helping them first of all and it’s helping me because I get to observe what they do.”

Firefighters from the various agencies responded to the parking garage, assessing and transporting victims to triage on the ground level where the victims could be treated.

The Pelham and Helena Fire Departments assisted in the treatment of victims. Pelham Fire Chief David McCury said it allowed his team to practice their communication with other agencies in a multi-victim disaster.

“We brought in an engine to assist in taking care of all these patients and transport golf carts to get them out of the garage,” he said. “This is a management exercise to get everyone on target to overcome the many obstacles in this type of situation. It’s not common for us to have to deal with 60 victims. It’s just a good training.”

The training took place in Hoover, but the same techniques and protocol would be used in any city if disaster were to strike, Coker said.

McCury said he knows if something happened in Pelham, the other agencies would respond for assistance.

“All you have to do is call and you’ll receive people and equipment to help out,” he said.

Festival goers to the Morgan Creek Grape Stomp dance and listen to the music during the festival Sept. 18. (Reporter... read more