Cooking among Oehrlein’s many interests 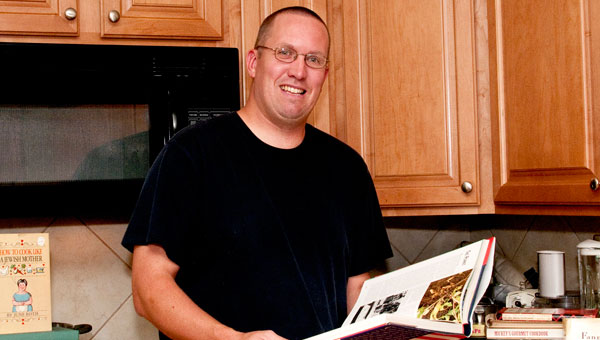 Dr. Chuck Oehrlein has an eclectic collection of cookbooks. From Fanny Farmer and Craig Claiborne to the ‘Anniversary Slovak American Cookbook 1892-1952’ and ‘How to Cook Like a Jewish Mother.’

Dr. Chuck Oehrlein is a man who knows what he likes. Along with his day job of “saving soles” at the Foot Center in Hoover, he likes to compete in triathlons, collect old cookbooks and is a big fan of the chef demos at Helena Market Days.

“I love the chef demos and I like it that you can buy most all the ingredients at the market. I try to buy something from all the vendors,” he said.

Oehrlein has recreated many of the dishes presented this summer. “My favorites were Chef Tom Bagby’s stuffed pork tenderloin and the watermelon salad created by Chef U. And Chef Robert Kamm’s fruit tiramisu,” he added.

His cooking skills were honed in appreciation of his great Aunt Mae Wind, who ran a candy factory on Long Island during World War II.

“Aunt Mae hired women who needed a means of support for their families. Her own husband, Rudolph Wind, died of a brain tumor in ’39, and the candy factory was her livelihood for raising her four children.”

Recently, Oehrlein learned an interesting piece of family lore. “Uncle Rudolph invented a laxative product he called ‘Wind-Lax.’ He did not have it patented and it later appeared on the market as Ex-Lax.”

Oehrlein also cites the influence of his father, Rich, who is a volunteer fireman in Babylon and locally acclaimed for his sauerbraten.

“Good cooking,” Oehrlein proclaimed, “is not hard. Clean up is hard.”

Oehrlein cooks for his wife, Kim, daughter Mary Elizabeth and son Richard. He and Kim met at Syracuse University. After graduating from Pennsylvania College of Podiatric Medicine, he answered a help wanted ad placed by the Foot Center in ’98 and brought Kim and his zany sense of humor to the south.

Oehrlein is currently training for his first Half Ironman competition.

He completed a half-marathon at Orlando’s Disney World this winter with snow falling, he noted, and the Nautica Triathlon at South Beach, Fla.