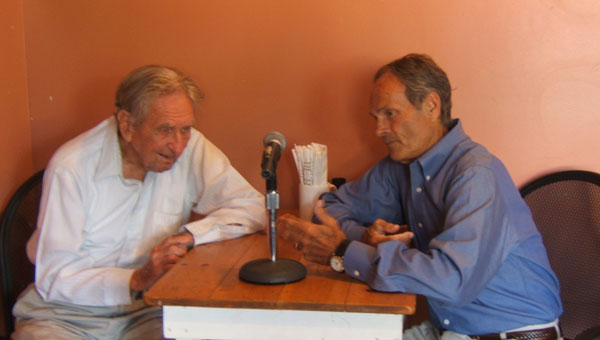 J. A. Brown (L) and John Kirby (R) enjoy telling stories of growing up in Montevallo.

A recent night of storytelling at Eclipse introduced the second edition of Eloise Meroney’s “Montevallo, the First One Hundred Years and Other Stories of Historic Montevallo.”

The book was reprinted by the Montevallo Historical Commission.

John Kirby told stories of a happy childhood in Montevallo; swimming in the creek, going to the “picture show” on Saturdays for the “shoot-em-ups,” and one special tale of a Halloween night when he drew pictures on the dime store window, was caught by the police and harshly sentenced to facing the owner, Laura Hicks, with an apology.

Enchanting tales of a childhood in Montevallo came from Barbara Belisle.

She told of living with her family in the middle of “Mayweather compound” on Ashville Road; how all of the family members played musical instruments together; the games the children played; how they loved going to the movies on Saturday afternoons with candy and peanuts from Rogan’s store.

She talked very little of that day’s discrimination, but said simply, “That’s just the way it was back then.”

A young life as the neighborhood scalawag supplies J. A. Brown all of the story material he could ever use.

One of his funniest was of becoming furious with a young community bully who would go around destroying the neighbors’ jack-o-lanterns.

Brown decided to do something about it, so he carefully stripped and wrapped an electric wire around his own pumpkin, and then hid and watched as that “bad boy” grabbed the pumpkin with both hands. Poor fellow got a shocking surprise, but you can bet he never again went near a jack-o-lantern.

Bill Plott, a relative newcomer of about 35 years, came to town as the public relations director at UM.

He related how he was greeted, the first day on the job, with the task of accompanying a group of rowdy students to New York; a task for which he was ill-prepared.

The comical challenges of that job and those of coaching young girls’ softball made entertaining stories.

Moderator Mike Mahan gave a most interesting account of the history of the Strand Theater and its owner, Eddie Watson.

Watson was an influential citizen and an exceptional business man.

The theatre was opened in the days of silent movies and operated by Watson until 1971.

At the height of its popularity, four different first-run movies were shown every week.

Meroney’s book is available at Parnell Library, Eclipse and Serendipity.

Pam Northcutt has worked for the Shelby County School system for 18 years now. She currently teaches the After School... read more