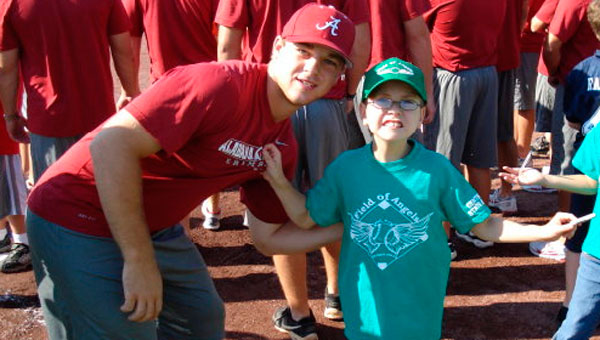 University of Alabama sophomore Brett Booth poses for a picture with a participant in the Field of Angels special-needs baseball league at Oliver Park in Calera during closing ceremonies Sept. 18. (Contributed)

The Field of Angels special-needs baseball league in Calera ended its inaugural season Sept. 18 with a few special guests from Tuscaloosa.

The University of Alabama baseball team greeted league participants at Oliver Park and participated in the league’s season-ending ceremonies.

As part of the festivities, University of Alabama junior Taylor Dugas threw out the ceremonial first pitch to start the game. Before and after the game, the Crimson Tide players signed autographs, met with the league’s players and took pictures with the children and their families.

Calera City Councilman Chris Bunn, who created the Field of Angels league, said the gathering touched the lives of both league participants and members of the Alabama baseball team.

“The kids really enjoyed having the (Alabama) players there,” Bunn said. “I think it meant just as much to the Alabama players. They got to see what these kids deal with each day.”

Bunn said Stephanie Eddleman, a senior at the University of Alabama from Calera, contacted Crimson Tide baseball coach Mitch Gaspard via e-mail and invited the team to participate in the league’s closing ceremonies.

University of Alabama junior Adam Morgan praised the league’s organizers for their commitment to the community’s special-needs children.

“It was very rewarding,” Morgan said. “The kids were having such a good time no matter what they were doing. (Those involved with the program) are some of the nicest people I’ve ever met.”

Gaspard said the visit to Calera provided his players with plenty of life lessons.

“You realize how fortunate you are and I think our players feel the same way,” Gaspard said. “But you also realize that those kids play with the same passion and enjoy the game just like we do. We’re just happy we were able to be a small part of it all.”

The Field of Angels League was created by Bunn and other community volunteers who saw the need for a baseball league for children with special needs. The league is made up of four teams —Red, Orange, Blue and Green — that are made up of children from Calera and surrounding communities.

Bunn said the closing ceremonies were a fitting end to a successful first season.

“The closing ceremonies were bigger than the opening ceremonies,” Bunn said. “I would say we were very well pleased. There was a lot of community support and the kids felt it most of all.”