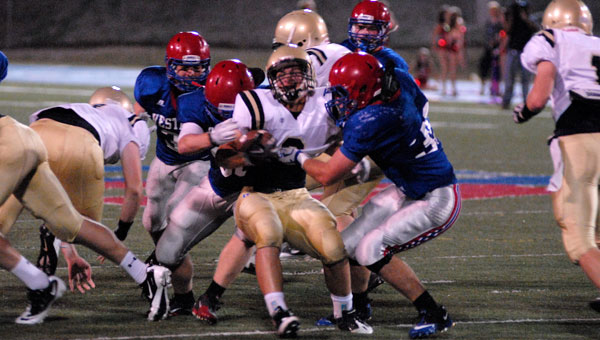 VESTAVIA HILLS — After tying the game at 10 just before halftime, Briarwood Christian School (4-1, 3-0 in Class 5A, Region 5) not only had the momentum, but it also had the ball for the first possession of the second half.

The Lions looked poised to drive 91 yards to take the lead against Class 6A Vestavia Hills (5-0, 3-0 in Class 6A, Region 6) and eventually pick up their fifth win of the season.

Instead, what looked like a game full of promise for Briarwood turned into a night of miscues and missed chances, as the Lions dropped a non-region contest to the Rebels, 34-10, in front of a packed Thompson Reynolds Stadium Sept. 24.

“I’m real proud of our kids,” Vestavia Hills coach Buddy Anderson said. “It was a great effort all the way around. We got some breaks and took advantage of those breaks.”

Anderson’s defense had something to do with catching those breaks, as the Rebels forced four turnovers, including two interceptions from Briarwood quarterback Ben Craft.

The losing coach had a different name for the barrage of turnovers.

“That’s called suicide,” Briarwood coach Fred Yancey said. “When you do that, you’re dead in the water.”

The Lions quickly answered on their next drive, cutting into the lead with a 44-yard Wilson Whorton field goal.

Briarwood’s offense got the ball back one more time before halftime and made it count.

The Lions used eight plays to get to the Rebels’ 23-yard line. Craft then lofted a pass to wide receiver Daniel Robert in the left side of the end zone, and Robert — using every bit of his 6-foot-3 frame — reached over a Rebel defender and performed a juggling act before pinning the ball against his body just before it hit the ground.

The 23-yard scoring connection with 39 seconds left in the second quarter capped a nine-play, 71-yard scoring drive and drew the Lions even.

Craft finished with 187 yards through the air on 18-of-23 passing with a touchdown.

The wave of momentum turned for good in the opposite direction during Briarwood’s initial second-half possession.

After moving the ball from its own 9-yard line to the Rebels’ 27-yard line in nine plays, the Briarwood offense went for the kill.

Running back Matthew Furuto took the direct snap and handed off to Tanner Cunningham, who was coming in motion from left to right.

Cunningham pitched the ball back to Craft, who had lined up at receiver to start the play, but Craft muffed the exchange. The ball fell to the ground and was recovered by a Rebel defender at Vestavia’s 45-yard line.

The Rebels promptly drove 48 yards and settled for the go-ahead points with a 24-yard Raspino field goal with 5:19 remaining in the third quarter.

Yancey said he would call the exact same play if he had to do all over again.

“It was a great call. We just didn’t execute,” Yancey said. “If we can just pitch it to Ben and let him catch it and throw it, we’re ahead. Now you never know how momentum gets to going at that point.”

But it wasn’t meant to be. At least not on this night.

The Rebels added two touchdown passes from quarterback Patrick Prewitt and a 32-yard scoring run by tailback Stuart Jacobs to put Briarwood away in the second half, outscoring the Lions 24-0 in the final 30 minutes.

“I just hate that the wheels came off, but you’ve got to give Vestavia credit,” Yancey said. “When we play good teams like that, you learn an awful lot. I hope we did tonight.”

Prewitt went 5-for-13 for 99 yards and two scores while Neil Gannaway was on the receiving end of both touchdowns.

Jacobs led the Rebels’ ground game with 52 yards on 10 carries and a touchdown.

“Our kids just executed,” Anderson said. “That’s the only thing I can say.”

Both teams will return to region play Oct. 1, as Briarwood travels to Talladega and Vestavia Hills takes on Homewood.