Shelby County falls on the road at Southside-Gadsden 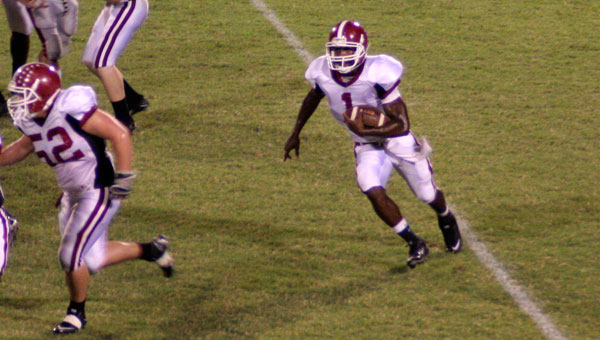 It was a long trip to Etowah County for the Shelby County Wildcats, but an even longer one home as they fell to the Southside-Gadsden Panthers 32-29 in a non-region contest Sept. 24.

Despite a late Shelby County scoring surge in the fourth quarter, the Panthers torched the Wildcats’ defense with long runs and big plays throughout the night.

“Our kids played hard tonight, but we didn’t play a drop of defense,” said Shelby County coach Ryan Herring.  “We’ve got to continue to work hard and become a better football team.”

The Wildcats struck first as Denzel Williams bolted to the Panthers’ end zone for a 55-yard touchdown run.  After the point-after attempt, the visitors held an early 7-0 lead.

The Panthers chalked up two scores of their own later in the first half with a 22-yard and 65-yard scoring run – both untouched. Missing on one of the two point-after attempts, the home team held the slim 13-7 lead.

On the ensuing possession, the Wildcats countered with a 10-play, 65-yard scoring drive that ended with Brent Wooley rumbling in from the Panthers’ 6-yard line. The Wildcats reclaimed the lead 14-13.

Before halftime, the Panthers connected on a 31-yard scoring toss and a 5-yard scamper that was set up by a 90-yard run to the Wildcats’ 5-yard line  At the half, the Panthers were on top 26-14.

The third quarter ticked along without a score and with their first possession of the fourth quarter, it looked as though the Panthers would claim the victory going away after a 7-yard scoring run to extend the lead to 32-14 with eight minutes remaining.

The Wildcats responded with Williams connecting with Chris Suttles on a halfback pass for a 33-yard touchdown strike to cut the lead to 32-22.

When all the Panthers needed was a first down to run the clock and claim a win, Joey Guthrie picked off a pass and trekked into the end zone from the Panthers’ 31-yard line.

A 10-point lead was quickly diminished to three, but the Panthers were able to protect their home turf.