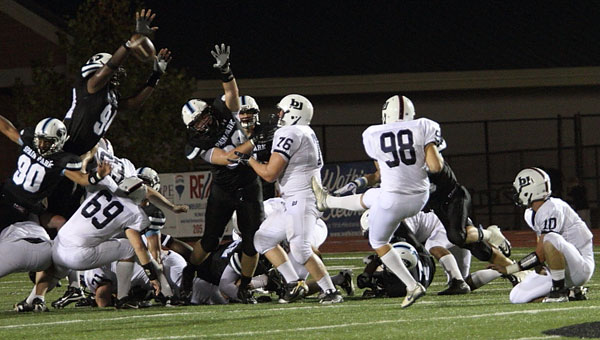 Spain Park High School’s second-half surge was not enough after giving up 28 points in the first half Sept. 24 in a 28-21 loss to Bob Jones.

It was all Bob Jones in the first half of the game. The Patriots got off to a quick start with senior running back Collins Moore running back the opening kickoff 99 yards to take an early 7-point lead.

The Patriots’ defense kept the Jaguars off the field, forcing a punt on the first four drives and holding Spain Park on a short fourth down to get the ball back for their offense.

After giving up 28 points to Bob Jones, the Jaguars’ defense would not give up.

Senior defensive tackle Emmanuel Cooper intercepted a pass and returned it 36 yards for Spain Park’s first touchdown with a little over a minute left in the in the first half.

On the very next drive, the Jaguars forced Bob Jones to try for a long field goal and Emmanuel Cooper stepped up again as he blocked the kick to keep the points off the scoreboard. Bob Jones went into the locker room with a 21-point lead.

With an encouraging defensive stand going into halftime, Spain Park came out of the locker room with momentum.

The Jaguars’ defense forced a punt on the first drive and the offense took the ball 80 yards down the field, capping off the drive with a 2-yard touchdown run by sophomore running back Kevron McMillan to cut the lead to 14 points.

Spain park was not done yet. The Jaguars forced two sacks and and recovered a fumbled snap to take the ball back on their own 17-yard line. Three plays later, McMillan put another touchdown on the board with a 5-yard run.

Bob Jones was forced to try a 37-yard field goal in the fourth quarer to put the Patriots up by two possesions. The kick was wide left and gave Spain Park 1:50 to drive 80 yards and attempt to tie the game with a touchdown.

On the second play of the drive, Bob Jones intercepted a Nick Mullins pass to seal the victory for the Patriots.

“They took the wind out of our sails early with the big kickoff return early,” said Spain Park coach ben Berguson. “But I thought we just came back and played hard.”

Spain Park finished the game with 322 total yards, with 110 of those coming on the ground from running back Kevron McMillan.

Bob Jones racked up 425 yards for the game.