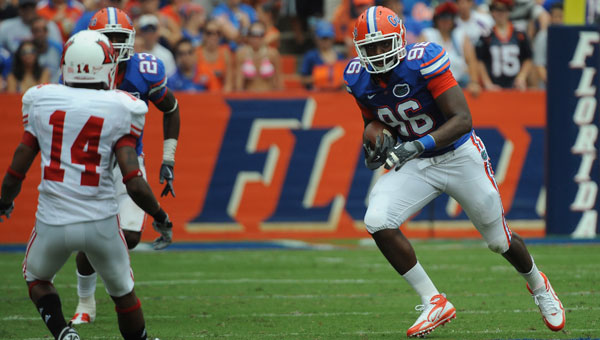 Former Spain Park High School football standout William Green, in his third season at the University of Florida, returns a kickoff in the Gators' season opener Sept. 4 against Miami-Ohio. (Contributed)

After watching the final seconds tick off the clock in No. 1 Florida’s 24-14 triumph over No. 2 Oklahoma in the FedEx BCS national championship game on Jan. 8, 2009, William Green, then a freshman defensive end for the Gators, joined his teammates in jubilation on the freshly worn-out grass of Miami’s Orange Bowl.

“It was fun,” Green recalled.

Green, however, isn’t content with one championship. He wants more.

Green is returning to his home state this weekend as the Gators face off with Alabama, the defending National Champions. Kickoff for the Oct. 2 game at Bryant-Denny Stadium in Tuscaloosa is set for 7 p.m. The matchup between the top 10 teams will be televised nationally by CBS.

Green went to the University of Florida after a decorated high school career at Spain Park.

The 6-foot-3, 252 pound defensive end burst onto the scene during his junior season, tallying 54 tackles, eight sacks and 18 tackles for loss for the Jaguars.

Green built on those stats with a monster senior campaign in which he racked up 114 tackles and four sacks on his way to being named a first-team all-state performer and a PARADE All-American.

Viewed as having an ideal frame and excellent speed off the edge, Green was ranked as one of the top 10 defensive ends in the country by multiple recruiting services following his senior year. He was selected to play in the U.S. Army All-American Bowl — he was the only player picked from Alabama — in San Antonio, Texas, in early January 2008.

College coaches from around the country began blowing up Green’s phone, trying to persuade the talented prospect to become a part of their team.

Green can’t recall a whole lot about his recruiting process other than the speed at which it transpired.

“It was fast,” Green said. “I don’t really remember that much. It happened all so fast.”

After receiving “around 40 offers,” Green dwindled his options to Florida, Auburn and Alabama. After taking his official visits to different schools and talking it over with his parents, Green called Florida coach Urban Meyer to tell him he wanted to be a Gator.

“I felt like I could be the best player I could be at Florida,” Green said. “It was the best fit for me.”

Green was on the verge of fulfilling a lifelong dream of playing Division I football.

“I always wanted to play,” he said. “I didn’t expect it to be like it was. I surprised myself.”

The prized recruit joined more than 20 other signees to give the Gators a top-five recruiting class in 2008. With so many high-profile recruits going to the same school, Green soon realized he couldn’t get by on talent alone at the college level.

Green played sparingly in 13 games as a freshman and finished the season with seven tackles, one sack and a blocked punt that led to a touchdown against Kentucky.

Last season, Green spent most of his sophomore campaign backing up All-Southeastern Conference performers Jermaine Cunningham and Carlos Dunlap after starting Florida’s season opener against Charleston Southern — the first start of his career. He played in all 14 games for the Gators and accumulated 12 tackles and three tackles behind the line of scrimmage.

Green has spent this season backing up senior Duke Lemmens at the “fox” defensive end position. The junior has seen action in every game, registering two solo tackles, including one tackle for a loss of 8 yards. Green also had an 8-yard kickoff return in Florida’s 34-12 win in the season opener against Miami (Ohio).

But Green is ready to make a bigger impact.

Fans and coaches are waiting for the performance on the field to match the hype that surrounded him as one of the top recruits in the country nearly three years ago.

Green said he’s well aware of what he has to do to make that happen.

“I have to keep working,” Green said. “I have to improve all my fundamentals and become a better player.”

Defensive line coach Dan McCarney, who works with Green on a daily basis, said Green has all the tools to be a special player.

“He’s got such a motor and he plays so hard,” McCarney said. “If we sign 20-25 William Greens every year, we’ll keep challenging for championships. Period. He’s got great talent.”

That kind of talent could turn Green into an integral part of the Gators’ defense sooner rather than later and perhaps help get the Gators back to where they were just two Januarys ago — on top of the college football world.

“We’re capable of going as far as we want to go,” Green said. “We just have to stay focused and get better each week.”