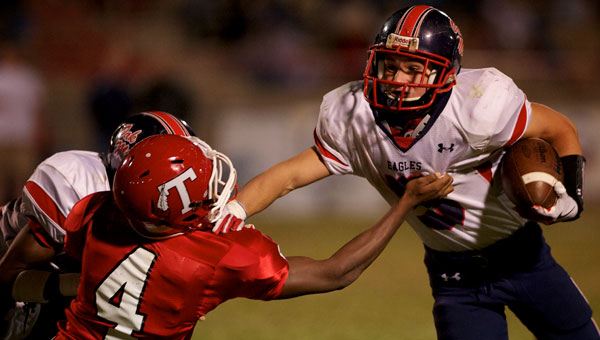 ALABASTER — Oak Mountain High School junior running back Bradley Bostick remembered the feeling of trailing on the road in a Class 6A, Region 6 contest at Larry Simmons Stadium in Alabaster.

The Eagles were in a hole against the Thompson Warriors last season and couldn’t dig their way out. Bostick was determined to not let another possible region win — and the Eagles’ first victory of the 2010 season — slip away Oct. 1 against the Warriors. 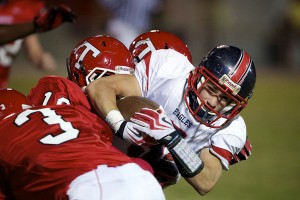 Oak Mountain running back Bradely Bostick tries to fight through the Thompson defense.

Bostick capped a comeback for Oak Mountain with two rushing touchdowns in the second half to spoil the Warriors’ homecoming night with a 20-14 victory over Thompson.

“We were in the same situation last year (at halftime),” Bostick said. “We just talked about how we had to give everything we had in the second half.”

The Eagles had a promising start after Bostick capped a 15-play, 81-yard scoring drive on the opening drive with a 1-yard touchdown run to put the Eagles up 6-0.

The momentum shifted in favor of the Warriors in the second quarter. Freshman quarterback Jay Burton, in his first varsity start, completed 4-of-4 passes on a 5-play, 79-yard scoring drive, capped by a 39-yard touchdown pass from Burton to senior running back Chris Cooper, to put the Warriors ahead 7-6. 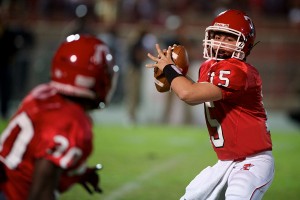 Bostick took over in the second half.

Following an interception by junior Cameron Bice, Bostick capped a four-play scoring drive with his 6-yard touchdown run to cut the lead to 14-12 with 8:38 remaining in the third quarter.

In the fourth quarter, Bryant Kelley returned a punt 39 yards to the Warriors’ 6-yard line, which set up Bostick’s 4-yard scoring run two plays later. Bostick ran it in for the 2-point conversion to give the Eagles a 20-14 lead they wouldn’t surrender. 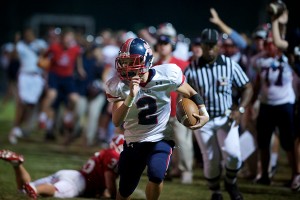 Oak Mountain's Bryant Kelley streaks down the sideline during a 39-yard punt return that set up the Eagles' game winning touchdown.

Thompson coach Bruce Hill said he was pleased with Burton’s first varsity start, but an interception and a fumble by Cooper on a punt return in the second half were too much to overcome. 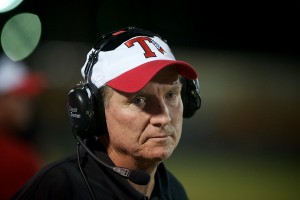 “I’m not disappointed in Jay,” Hill said. “He did a heck of a job. I was very pleased with his performance in the first half. But we never could dig our way out of bad field position in the second half.”

Burton completed 12-of-26 passes for 116 yards with two touchdowns and two interceptions in his first varsity start for the Warriors, who dropped to 1-5 overall and 0-4 in Class 6A, Region 6. He completed 7-of-14 passes for 113 yards in the first half.

The game was temporarily interrupted before the start of the fourth quarter when a streaker entered a gate on the Thompson sideline and darted across the field.