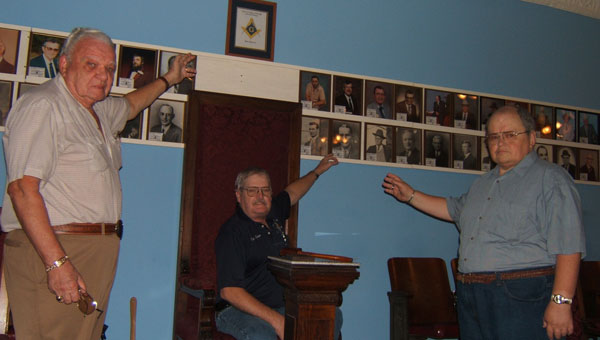 As a part of Montevallo’s Small Town Downtown Celebration, the Masonic Lodge, on the corner of Main and Vine streets, will host an open house on Friday, Oct. 15, from 1-3 p.m.

According to Eloise Meroney’s “Montevallo, the First One-Hundred Years,” “Next to the early churches the oldest, proudest, and most influential organization in town was probably the Masonic Lodge. Dispensation was issued on July 10, 1845, for the institution of Central Lodge No. 70. By November, 1848, meetings were held in the new Masonic Hall on Main Street at the hill overlooking the Little Spring. The building was destroyed by the cyclone of 1874.” Their next home was a frame structure in its present location. That building burned and was replaced by the building now standing in 1925.

The masons meet upstairs in a beautiful room that tells a story of its own. The walls are lined with pictures of the past worshipful masters and the Eastern Star’s past worthy matrons and patrons. There are many familiar faces among them; several college presidents including the first president of Alabama College, Dr Francis Peterson. Other notables are past mayors: Dr. Charles Acker, C. T. Meroney and Edward Lyman.

The Masonic Bible, with the symbol (the interlaced square and compass) of Freemasonry on the cover, is displayed on a table in the center of the room. Except for a small section in the front with information relating to Freemasonry, it is the King James Version of the Bible. Many of the masons’ rituals come from the Old Testament.

Through the years the Masons have been thought to be a very secret organization, but Lyn Emfinger, past-master and district lecturer, explains that their only secrets are the pass-words and the modes of recognition, and that they don’t really publicize their sizeable charities. They are an organization dedicated to service to mankind.

Historically the masons are a close-knit brotherhood. Chaplin Jimmie Harris gave an example. “During heavy fighting in the Civil War,” he said, “Two blue soldiers in enemy territory found a wounded gray soldier; discovered he was a Mason and took him across the blue line to a blue surgeon who was a mason and who operated on him. He was then taken back to where he was found.”

Membership in the masons is non-discriminatory, but a prospective member must seek that membership. The public is invited and encouraged to attend the open house.

Catherine Legg can be reached at clegg2@bellsouth.net