Bulldogs fall on the road at Northside 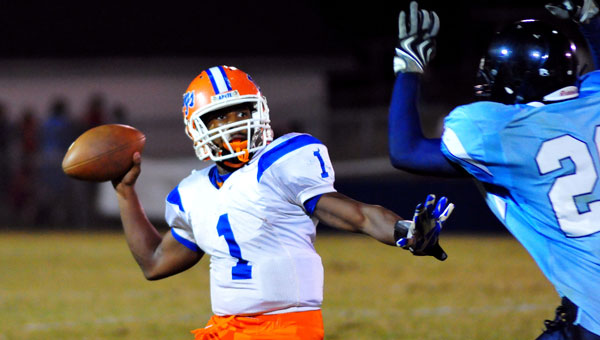 Montevallo junior Garrius Chappell attempts a pass in the Bulldogs' 37-31 loss to Northside in a Class 3A, Region 4 road contest Oct. 7. (Contributed/Brian Wolfe)

The Montevallo High School football team fell 37-31 on the road at Northside in a Class 3A, Region 4 contest Oct. 7.

Northside scored two touchdowns in the final two minutes to cap a comeback win against the Bulldogs, who fell to 2-5 overall and 1-4 in Class 3A, Region 4.

“The kids just battled their guts out,” said first-year Montevallo coach Jamie Williams. “It was back and forth all night. It was one of those games that neither team deserved to lose.”

Montevallo fell behind 3-0 in the first quarter.

The Bulldogs responded with a touchdown and a field goal in the second quarter and headed into the locker room at halftime trailing 15-10.

Scaife scored the first touchdown for Montevallo with his 1-yard touchdownr un with 8:29 remaining in the second quarter. Brett Gray added a 40-yard field goal as time expired in the first half to cut the deficit to 15-10.

The Bulldogs took the lead in the third quarter after B.J. Smith recovered a fumble in the end zone for a touchdown with 7:23 remaining in the quarter. Gray’s extra point gave Montevallo a 17-15 lead heading into the fourth quarter.

The Bulldogs extended their lead following a 9-yard touchdown run by Chappell early in the fourth quarter. Gray added the extra point to push the lead to 24-15.

Following a Northside touchdown, Chappell returned a kickoff 69 yards for a touchdown with 5:44 remaining in the game to push the lead to 31-23.

Northside scored a rushing touchdown and a passing touchdown in the final two minutes to overcome the deficit and seal the win.

Montevallo returns to action Oct. 15 as it travels to Gordo for a Class 3A, Region 4 game.