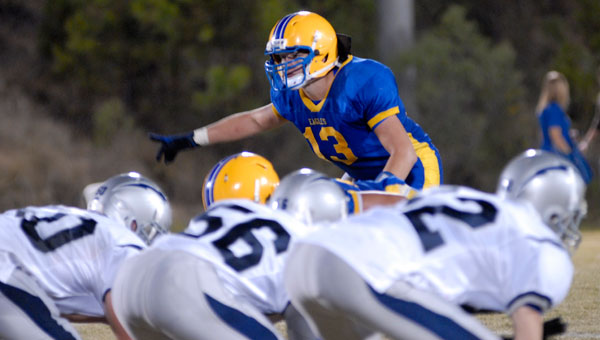 Rettig turned into the consoler for the opposing team Oct. 8 following the Eagles’ first-ever win in the series between the two teams following a 60-22 win over the Lightning at the Columbiana Sports Complex.

“It stinks,” said Rettig as he adressed both teams at midfield following the game. “We’ve been there when we lost to you. I’m just glad we all had the right attitude when the game was finished.”

Hope senior quarterback Zac Hughes played the biggest role in the Eagles’ victory. Hughes accounted for more than 300 yards in total offense and seven touchdowns. Hughes rushed for 137 yards and five touchdowns and added 183 passing yards and two scores through the air.

Evangel senior running back Josh Flanders led the Lightning with 105 rushing yards and a touchdown on 14 carries.

Hughes scored the first touchdown for the Eagles with his 1-yard scoring run on the opening drive less than two minutes into the contest. Glyn Glover reeled in a pass from Hughes for the 2-point conversion.

Evangel answered with an 11-yard touchdown pass from Hayden Brown to Aaron Walker minutes later and Flanders ran it in for the 2-point conversion to tie the game at 8-8 with 7:16 left in the opening quarter.

Hope responded with a 46-yard touchdown pass from Hughes to Terrence Moore on its next offensive play and a Hughes run for the 2-point conversion to push the lead to 16-8 midway through the first quarter.

Hope added to its lead following another 1-yard touchdown run by Hughes and a Hughes run for the 2-point conversion with 2:10 remaining in the opening quarter.

Evangel cut the deficit to 24-14 after Brown scored on a 3-yard touchdown run with 10:47 left in the first half.

Hope pushed its lead to 26-14 after Jacob Medders sacked Brown in the end zone for a safety. Hughes added a 1-yard touchdown run on the Eagles’ next offensive possession to push the lead to 32-14.

Evangel cut the lead to 32-22 following Flanders’ 18-yard touchdown run and a successful 2-point conversion on a run by Brown with 3:10 left in the first half.

Hope extended the lead to 40-22 heading into halftime after Hughes scored on a 5-yard touchdown run and Glover reeled in a pass from Hughes for the 2-point conversion.

The Hope defense tightened its belt in the second half and kept the Lightning off the scoreboard. Meanwhile, Hughes played a role in three more touchdowns to put the game out of reach.

Hughes threw a 15-yard scoring strike to Eric Spence and hit an open Andrew Bell for the 2-point conversion in the third quarter. Hughes scored his final rushing touchdown on a 5-yard run early in the fourth quarter and found Glover open for a 25-yard touchdown pass later in the quarter to cap the scoring for the Eagles.

Caleb Rettig led the Hope defense with 18 tackles and a fumble recovery.

“Our guys will be ready,” Rettig said.

From Staff Reports The Riverchase Middle School football team improved to 5-0 in conference play Oct. 7 with a win... read more