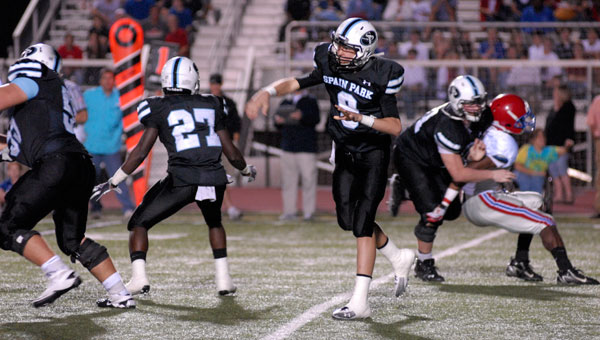 HOOVER — The work of a kicker typically goes unnoticed throughout the course of a football game.

Hoffman nailed a 27-yard field goal with 2 seconds left in the fourth quarter to give the Jaguars a 19-16 upset victory over Vestavia Hills — the No. 2-ranked team in Class 6A — at Jaguars Stadium.

Tied at 16 with 3:04 remaining in the contest, the Spain Park offense took over at its own 46-yard line with no timeouts.

Behind the strong running of tailback Jonathan Mwaitke and quarterback Nick Mullens, the Jaguars moved the ball to the Rebels’ 10-yard line in nine plays. Mullens spiked the ball with 4 seconds left to set up Hoffman’s game-winning kick.

Mwaitke had 19 carries for 62 yards and two touchdowns. Mullens added 52 yards on the ground while completing 15-of-23 passes for 156 yards.

“I knew this team had the potential to be dangerous,” Spain Park coach Ben Berguson said. “We had a great week of practice last week, and we just happened to hit on all cylinders tonight.”

Hoffman’s game winner came after the junior placekicker missed a go-ahead field goal on the Jaguars’ previous possession — a 42-yard attempt that came up short with 3:55 left in the game.

All he wanted was another chance, and he let the defense know it.

“I went over and told the defense; I said, ‘If ya’ll save me right here, I’ll get your back,’” Hoffman said.

The defense did its part.

The Jaguars forced a three-and-out on Vestavia Hills’ next possession and did it quickly, as only 51 seconds came of the clock.

True to his word, Hoffman delivered on his second chance. Hoffman calmly split the uprights with his kick, which sent the Spain Park sideline into a frenzy.

“I’ve got a lot of faith in Jake, and I had to put him back out there and give him a shot,” Berguson said. “He just did a great job for us.”

Hoffman connected on two of his four attempts, adding a 25-yard field goal in the second quarter.

The Rebels’ last-ditch effort to pull off a win ended on the ensuing kickoff, as a swarm of Jaguar defenders corraled returner Stuart Jacobs near the 35-yard line as time expired. Players, coaches and staff members immediately rushed the field in celebration.

“We just came together, and we pulled out a win,” Hoffman said. “We knew we could do it.”

Spain Park held a 9-6 halftime lead after Hoffman’s field goal and a 2-yard touchdown run from Mwaitke with 1:58 left in the second quarter.

The Rebels took the lead when quarterback Patrick Prewitt found Georgie Salem all alone on a wheel route down the left sideline for a 17-yard touchdown pass with 9:31 left in the third quarter.

Vestavia Hills pushed the lead to 16-9 on a 20-yard field goal from Ryan Raspino with 1:53 left in the third quarter before the Jaguars answered with a 3-yard touchdown run from Mwaitke on its next possession. Raspino finished a perfect 3-for-3 in field goal attempts.

Spain Park will host Pelham on Oct. 15 while Vestavia Hills will travel to Hoover on the same date to take on the top-ranked Buccaneers.