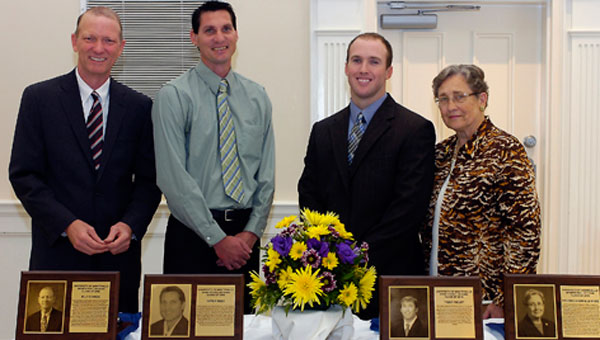 The University of Montevallo Athletic Hall of Fame Class of 2010 was enshrined Sunday, Oct. 10 at a ceremony held in the Anna Irvin Dining Hall on the Montevallo campus.

The 2010 class consists of Billy Cannon, a former basketball player and director of the McChesney Student Activity Center, Raven Keet, the first ever men’s soccer player at Montevallo to be named an All-American, Trent Preuitt, a 2005 Rawlings/ABCA and NCBWA All-American and Delores Brumfield White, a seven-year member of the All-American Girls Professional Baseball League.

Cannon has been a part of the University of Montevallo family for 40 years. Cannon joined the Montevallo basketball program for the 1970-71 season and played for four years before graduating in 1974. Cannon was part of 1972 and 1973 Alabama Collegiate Conference Champions and was named the team captain in 1974.

Following graduation, Cannon joined the Montevallo staff as an admissions counselor. Cannon also helped coach the men’s basketball program for two more seasons as an assistant coach. He spent 29 years in the admissions office at Montevallo, eventually being named director.

After retiring, Cannon stayed on with the department as a senior admissions counselor for one year. In 2004, he was given the role as the director of the McChesney Student Activity Center on campus and served in that capacity for seven years.

Keet holds three of the top four spots in the Falcons’ record book for saves in a game and is second all-time in career saves. Keet also holds the Montevallo single-season record for lowest goals against average with a 0.60 GAA in 2004. Keet is also the career leader in shutouts with 23. Keet was in goal for the Falcons’ first trip to the NCAA tournament in 2004 and also was the goalkeeper for Montevallo in the first Gulf South Conference Tournament Championship in 2004.

Preuitt played baseball at Montevallo from 2002-05. Preuitt was the 2005 Gulf South Conference’s East Division Player of the Year. He was twice named to the GSC East Division first team. In 2005, Preuitt was named an All-American by both Rawlings/ABCA and the NCBWA.

Preuitt was statistically the toughest batter to strike out in Division II baseball in 2005. In his four years at Montevallo, he had a .367 batting average with 167 RBIs and 178 runs scored. Preuitt hit 25 homeruns and struck out just 33 times in 754 at bats. He holds the single-season record for hits with 105 at Montevallo, which occurred in 2005. Preuitt struck out just six times while compiling a .436 batting average.

White graduated from Alabama College, now the University of Montevallo, in 1954. Prior to arriving on campus, White joined the All-American Girls Professional Baseball League in 1947 at the age of 14. The AAGPBL was chronicled in the hit movie, “A League of Their Own.”

In 1946, at the age of 13, White was offered a spot on a team in Chicago but her parents would not allow her because of her age. In 1947, she attended spring training in Havana, Cuba and was drafted by the South Bend Blue Socks.

White spent seven seasons playing in the AAGPBL and was a part of three different teams, including the Blue Socks. White’s best season was in 1953 when she had a .332 batting average with 51 walks and just 15 strikeouts. Using her $55 a week salary, she saved up enough money to attended Alabama College and received her bachelor’s in health and physical education.

In 2004, White received the University of Montevallo’s Distinguished Alumna Award.

White spent more than 40 years in the teaching and coaching profession, including 30 years at Henderson State University as professor and coach. White is a member of the Henderson State Hall of Fame and has also received the award for the University of Montevallo’s Health, Physical Education and Recreation Alumna of the Year.