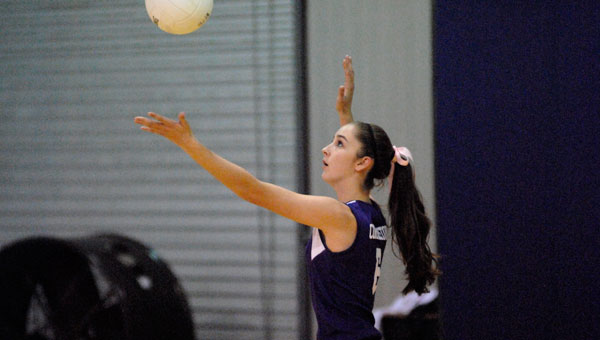 COLUMBIANA — Cornerstone Christian School volleyball coach Cyndi Sims knew the Chargers had the pieces in place for a successful 2010 season with a group of four seniors returning with plenty of varsity experience.

Following the Chargers’ 25-20, 25-18, 25-10 sweep of the Raiders, Sims offered perspective of what the senior class has meant to the Cornerstone volleyball program.

“We have a good group of seniors that have been here for a long time,” Sims said. “We’re going to take a little bit of a hit next season when they leave.”

The seniors each played a key role in their final home game.

Goodwin recorded five kills and six service aces for the Chargers, who improved to 8-7 overall and 8-4 in Alabama Independent Schools Association Class 1A, East Region matches.

Perry chipped in a kill and closed out the match with back-to-back service aces to seal the Chargers’ victory.

Sophomore Ashley Malone paced Cornerstone with seven service aces, including four down the stretch in the final game.

The Chargers will participate in the AISA Class 1A, East Region tournament Oct. 18 at Edgewood Academy.

FROM STAFF REPORTS Six high school volleyball teams from Shelby County advanced to the next round of the Alabama High... read more