Lions come back against Wildcats 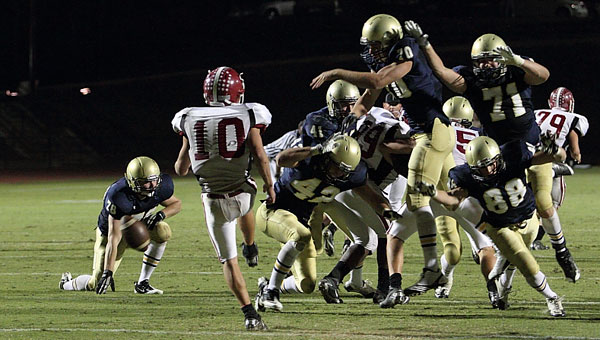 Briarwood Christian School defensive lineman Jake Whaley (70) blocks a punt by Shelby County punter Evan McNeal in the first half of the Lions' 41-18 win Oct. 15 over the Wildcats. (Contributed/Jimmy Mitchell)

Shelby County High School head football coach Ryan Herring thought he was having flashbacks from two years ago during the first quarter of the Wildcats’ Class 5A, Region 5 contest Oct. 15 at Briarwood Christian School.

He watched his Wildcats jump out to an 18-0 lead early — much like they did in a 26-3 win two seasons back — following three turnovers by the Lions in the opening quarter of their homecoming game.

Reality hit soon after as Briarwood posted 41 unanswered points on the scoreboard, including 27 in the second quarter to erase the early deficit and take a nine-point lead into the locker room at halftime, as the Lions came back to defeat Shelby County 41-18. The Lions (7-1 overall, 6-0 in Class 5A, Region 5) sealed the top spot in Region 5 with the win and secured home-field advantage in the first round of the Alabama High School Athletic Association playoffs in early November.

“Our kids may be young,” Herring said, “but they made this a fun game to watch for a while.”

Following a fumble by Briarwood quarterback Ben Craft, the Wildcats failed to take advantage of good field position deep inside the Lions’ territory.

After Marterius McGregor picked off a Craft pass on the Lions’ next possession, Shelby County did take advantage of good field position when fullback Brent Wooley pounded his way into the end zone from 3 yards out to give the Wildcats a 6-0 lead with 7:08 left in the first quarter.

Following a 6-yard quick kick by Craft, Shelby County running back Denzel Williams streaked down the left sideline for a 66-yard touchdown run to push the lead to 12-0 with 5:43 left in the opening quarter.

After forcing another three-and-out, the Wildcats’ capped their ensuing 10-play, 50-yard offensive drive with a 21-yard touchdown run by Williams to extend the lead to 18-0 with 8:25 left in the first half.

Briarwood running backs Matthew Furuto and Sam Whitaker finally got the offense going after Craft struggled with a fumble, a bad punt and two interceptions in the first quarter.

Whitaker responded to the Wildcats’ third touchdown with a one-play, 69-yard drive with his 69-yard scamper down the left sideline for the Lions’ first touchdown in the game with 8:05 left in the second quarter. Furuto ran it in for the 2-point conversion to cut the lead to 18-8.

After forcing Shelby County to punt the ball on its next possession, Furuto capped a seven-play, 37-yard drive with an 8-yard touchdown run. Furuto covered all 37 yards on six consecutive rushing plays before Wilson Whorton converted the extra point to cut the lead to 18-15 with 4:12 remaining in the first half.

Following another three-and-out by the Wildcats, Craft capped a five-play, 55-yard scoring drive by the Lions with his 6-yard touchdown run to give Briarwood a 22-15 lead with 2:06 left in the first half. The Lions recorded a safety with 31 seconds left in the first half after defensive lineman Jake Whaley blocked a Shelby County punt through the back of the end zone.

Following back-to-back runs by Craft for a total of 23 yards, Whorton capped the scoring in the first half with his 39-yard field goal with two seconds left to give the Lions a 27-18 lead.

Whitaker led the Lions with 120 rushing yards and two touchdowns on 10 carries.

Safety Chad Davis played a key role on defense for the Lions, as he picked off two passes deep in Briarwood territory to stall two drives by the Wildcats in the second half.

Briarwood coach Fred Yancey said the Lions were fortunate the early turnovers weren’t a factor in the outcome of the game.

“Our turnovers gave us problems,” Yancey said. “We had to overcome them. We’re glad we were good enough to come back.”