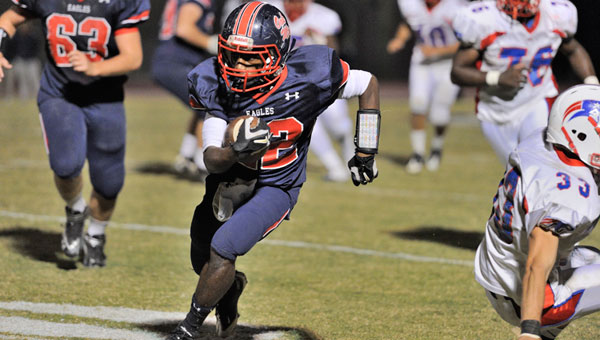 Oak Mountain High School running back Jakaryus Redwine looks for an opening in the Homewood defense in the Eagles' 21-17 loss to the Patriots on homecoming night Oct. 15. (Contributed/Barry Clemmons)

Head coach Jeff Harris and the Oak Mountain football went with youthful energy Oct. 15, but the result was the same for the Eagles.

“It was good to see us battling hard for four quarters and not folding,” Harris said.

After the Patriots (4-4 overall, 2-4 in Class 6A. Region 6) opened the scoring with a 17-yard Stephen Baggett touchdown pass, Oak Mountain stormed back to take a 10-7 halftime lead behind a 28-yard touchdown strike from quarterback Mickey Todd Forrest to Jakaryus Redwine and a 27-yard Mitch Mathias field goal.

Forrest, who was making his first varsity start, finished 16-of-33 for 218 yards with one touchdown and an interception.

The two teams traded touchdowns — and leads again — before Baggett found Young in the end zone once more for the game-winning score.

Oak Mountain running back Bradley Bostick provided a spark on the ground, as the senior racked up 145 yards and one touchdown on 27 carries.

The Eagles, who dropped to 1-7 overall and 1-5 in Class 6A, Region 6 play, have endured a trying season full of injuries and frustration, but Harris said the play of his youngsters gives him hope for the future.

“The morale is very high,” Harris said. “We’re playing with very inexperienced kids. The young guys are stepping up.”

Montevallo falls on the road at Gordo