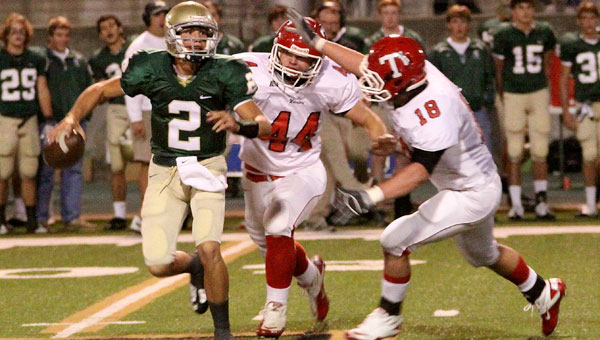 MOUNTAIN BROOK — Mountain Brook High School hosted the Thompson High School Warriors on Oct. 15 and showed why they have one of the top defenses in the state following a 42-6 win.

Thompson mustered just six points as it dropped to 1-7 overall and 0-6 in Class 6A, Region 6 play, as the Spartans rolled through the air and on the ground.

When Thompson head football coach Bruce Hill and his staff took the reigns in the spring, they set the expectations that this was a rebuilding year and it would take some time to get back on the right track.

Still, the current losses are tough for a team and a coaching staff putting in long hours and determination.

The Spartans jumped on the Warriors early, going 70 yards in seven plays to take an early lead.

The Warriors secondary couldn’t catch up to the Spartan receivers, and that led to Mountain Brook scoring five touchdowns through the air on its first six possessions.

Quarterback Edward Aldag connected with John McCrary for four of the scores.

Thompson used a host of young players on the night as the coaching staff changed up schemes and made plans for the future.

“We played a lot of young players tonight and are building towards becoming the team we want to be,” Hill said. “Mountain Brook is a great team and we just couldn’t match their play.”

Using a two quarterback rotation of sophomore Trey Matherson and freshman Jay Burton during the game, the Warriors used it to their advantage.

The two-quarterback system and a little trickery led to Thompson’s only score.  Matherson, running back Demarcus Threatt and Burton ran a reverse play that saw Burton hit an open Tresman Gaddis in stride for a 70-yard touchdown strike mid-way through the first half.

Burton completed 4-of-7 passes for 88 yards and one touchdown.

Thompson will close out Class 6A, Region 6 play Oct. 22 at home against Spain Park.

Oak Mountain High School senior Chelsea Payne sets up a teammate for a kill in the Eagles' win over Hoover... read more