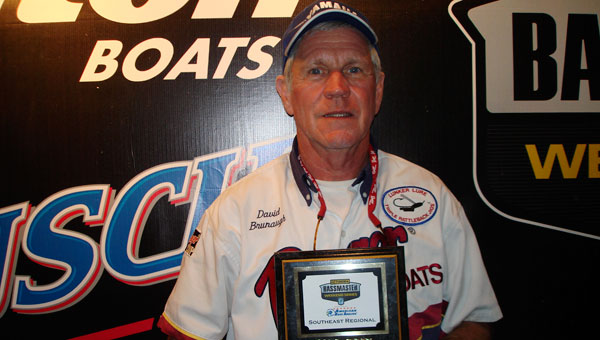 David Brunaugh of Carbondale, Ill., won the 2010 Lay Lake Regional, part of the Toyota Tundra Bassmaster Weekend Series and hosted by the American Bass Anglers, following a total catch of 25.96 pounds at the two-day tournament Oct. 15-16.

Launching at Beeswax Creek, Brunaugh caught the limit of five bass each day as he reeled in 14.03 pounds on the first day of the tournament and 11.93 pounds of bass on the second day to seal the win.

Chad Hall of Dora finished second overall with his two-day catch of 10 bass for a total of 23.36 pounds. Kevin Fant of Kirby, Ark., came in third as he caught 10 bass weighing in at 21.25 pounds in the two-day tournament.

The co-angler big fish was caught by Terry Geren.

The South Shelby Chamber of Commerce helped coordinate lodging for the visiting anglers and greeted the anglers at registration.