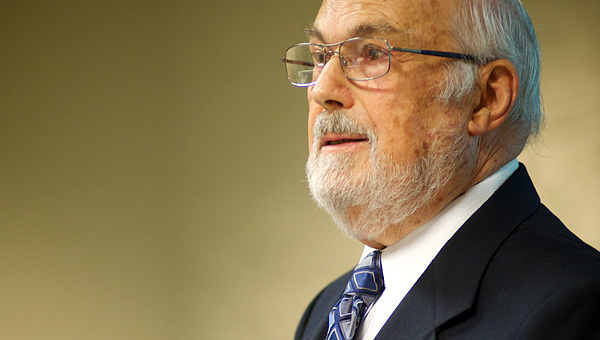 MONTEVALLO — At the Montevallo Chamber of Commerce luncheon Oct. 20, Max Herzel, a Holocaust survivor from Birmingham, told his story.

Chamber members listened as Herzel retold stories from his childhood about internment camps, hiding from soldiers, wearing a yellow star of David and being separated from his family at the age of 12.

“Even though it was over 70 years ago, many of the occurrences remain deeply etched in my memory,” he said. “Three and a half years of my life were packed with unpleasant events.” 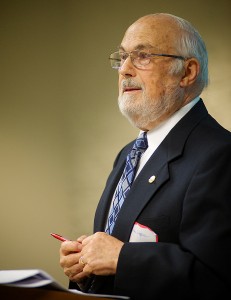 The whole Montevallo community will soon get to witness Herzel’s memories of the Holocaust along with those of eight other local survivors. On Oct. 25, the Parnell Memorial Library will open “Darkness into Life,” an art exhibit that illustrates the stories of the nine survivors through paintings and photographs.

The exhibit is sponsored by the Birmingham Holocaust Education Committee, the library and the Montevallo Arts Council.

Libbie Rodgers, president of the arts council, said the exhibit will be on display in the library’s gallery until Dec. 4 and is free for all guests.

“I think it’s a real honor to have an exhibit of this scope,” she said. “This is an arts community. We have a wide range of people interested in arts and history.”

Jane Claytfon, chair of Montevallo Library Board arranged for area students to learn for the exhibit also. All students at Montevallo High School will take a field trip through the exhibit in November. All sixth grade students will participate in guided tours during the exhibit’s opening week. Clayton said she thinks the exhibit will be a good supplement to the Holocaust curriculum the students learn in school.

“I think it will put names and faces to people who were actually there,” she said. “To actually see people from a local municipality will be much more personal and relevant to them.”

Clayton said she thinks the exhibit will serve as a warning and reminder to the students.

“It will show what happens when we start looking at people as things rather than human beings,” she said. “Hopefully this will springboard other discussions in the classroom. It’s a lesson that doesn’t stop when they leave the gallery.”

The library will host a reception Nov. 7 at 2 p.m. featuring the exhibit’s artist and photographer. All nine of the Holocaust survivors have also been invited to attend. Rodgers said the event is open to the public.