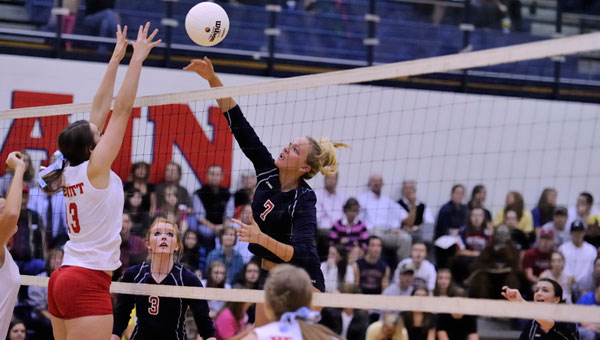 NORTH SHELBY — When Tammy Richardson came out of retirement to take the job as Oak Mountain High School’s head volleyball coach prior to the 2009 season, she didn’t plan on settling for mediocrity.

She wanted to win another state title.

Richardson and her Oak Mountain team moved one step closer to that goal after sweeping Hewitt-Trussville, 25-15, 25-23, 25-18, in Match 5 of the Alabama High School Athletic Association Class 6A sub-state playoffs at the Oak Mountain High School gymnasium Oct. 21.

With the win, the Eagles (55-18) advanced to next week’s Elite Eight state tournament in Pelham — the team’s second consecutive Elite Eight appearance under Richardson.

Oak Mountain didn’t seem to miss a beat after juggling its lineup with the absence of starting outside hitter Samantha Skinner, who was held out of the match because of an illness.

Richardson said her players adjusted well on the fly.

The Eagles stormed out to a 9-3 lead and never looked back to capture the first set of the match. Hewitt-Trussville battled through the second set and tied the score at 19, but the Eagles outscored the Huskies 6-4 down the stretch to take a commanding 2-0 lead in the match.

Oak Mountain started fast yet again in the third and final set, opening up with an early 5-1 lead. Hewitt-Trussville pulled within three points at 14-11 at the midway point, but the Huskies couldn’t get any closer. The Eagles went on an 11-7 run to win the match and prolong their season.

“It’s the thing that you work for,” Richardson said. “It’s just awesome.”