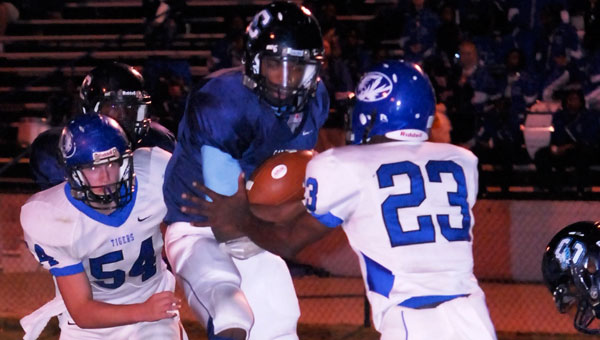 Calera High School celebrated Senior night Oct. 22 as 17 seniors made it a game to remember following a 35-0 shut out win over Childersburg to advance to the Alabama High School Athletic Association Class 4A playoffs with a trip to Bibb County in two weeks.

Calera used a balanced attack on the night as the Eagles gained 219 yards on the ground and added another 212 through the air.  The defense did its part as well, as Calera limited Childersburg to 15 passing yards and 240 total yards.

The Eagles’ defense would set up Calera’s first score on the night as Nick Pennington recovered a Childersburg fumble on the 40-yard line to give Calera a short field to work with.

Brandon Wells put the first points on the scoreboard when he finished off an eight-play drive by carrying it in on a 3-yard touchdown run. Erick Tinajero added the exra point to give Calera an early 7-0 lead.

Calera’s next score came quicker as the Eagles went 80 yards in just two plays. Wells found Jeremy Hyde down the middle of the field for a 67-yard gain on the first play. Eugene Rodgers scored from 13 yards out on the next play to put Calera up 15-0 after Jordan Bishop found Rodgers open in the end zone for the 2-point conversion.

Calera made the most of its one possession in the second quarter. The Eagles drove 90 yards on eight plays for their next score.  The drive featured a 53-yard run and a 29-yard touchdown run by Wells. Tinajero’s extra point gave Calera a 22-0 lead at the half.

Halftime did little to slow the Eagles as they took the second-half kickoff and drove 59 yards in five plays. Wells found Ronnie Clark wide open down the middle for a 28-yard touchdown strike. Tinajero’s extra point gave Calera a 29-0 lead.

Calera add its final touchdown in the fourth quarter when Zach Reneau ran it in from 8 yards out.  The score was set up when Reneau found Ronnie Clark open for a 54-yard gain.

Brandon Wells led the Calera offense with 117 rushing yards and two touchdowns.  Wells added another 144 yards and a touchdown through the air.

Ronnie Clark chipped in with three catches for 93 yards and a touchdown.

Calera improved to 5-4 on the season and 4-3 in Class 4A, Region 3 with the victory.  Calera will travel to Dallas County to close out the regular season Oct. 29. The Eagles will travel to Bibb County in the first round of the AHSAA Class 4A playoffs Nov. 5.