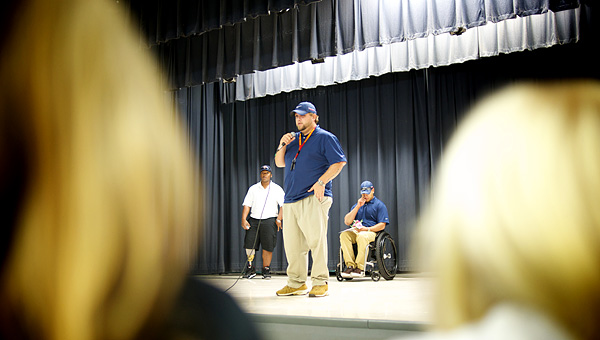 GREYSTONE — When an improvised explosive device ripped through solider Chris Smith’s vehicle in Iraq, he lost his right leg from the knee down and what seemed like any future in athletics.

Since then, Smith has defeated the odds by running marathons, playing basketball and participating in the Greystone Golf Tournament Oct. 21-22.

“I’ve been playing golf since I was 7 and I’m just now getting back into it,” he said. “It gives me release from all the stuff I have to face everyday.”

On Oct. 22, third and fourth graders at Greystone Elementary got to meet Smith and two other injured soldiers and hear about their injuries, recovery and hope for the future.

Wes Steed, president of the Greystone Foundation,  said all three soldiers played in the golf tournament to benefit the Alabama National Guard Foundation and the Achilles Freedom Team. Having them speak to the children at the school was an added bonus, he said.

“We wanted to bring these guys to the school to bring awareness and for the kids to see true heroes,” he said. “We have the utmost respect for what they’ve done and sacrificed.”

After hearing about each of their injuries, students had the opportunity to ask questions. Robin Griffiths, whose elbow was fused after his arm was hit with a mortar during combat, answered the question, “Do you wish your injury never happened?” 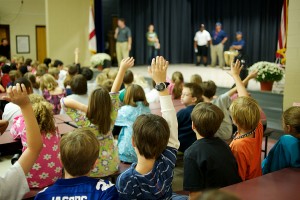 Greystone Elementary students eagerly raise their hands to ask the Wounded Warriors a question during the presentation. (Reporter Photo/Jon Goering)

“What happened to me opened doors in my life, my life has gotten better,” he said. “But I wish it hadn’t happened because then I could still be in the Marine Corps with those guys in Afghanistan and Iraq. It’s just the most awesome job in the world, it really is.”

All three soldiers received a Purple Heart for their time serving overseas. Some are still receiving rehab treatments and are working with the Achilles Freedom Team to train for marathons and other athletic events, Steed said.

Smith said he enjoys speaking to students and sharing how he can now do things he never thought possible.

“I’ve always been intrigued by kids,” he said. “I’ve gotten comfortable with my injury, so I don’t mind them asking about it.  At first it was pretty scary. I surprise myself now with the things I’ve been able to do since.”