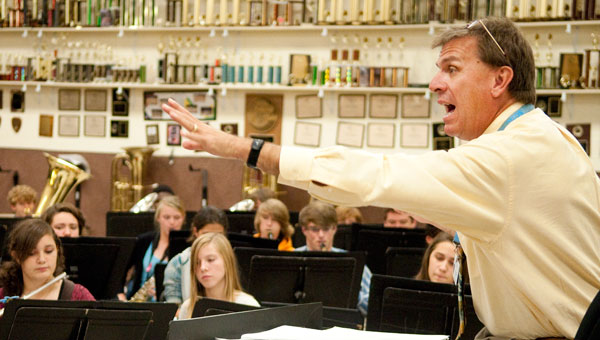 The Thompson High School band is looking for public support as it prepares to embark on the most prestigious event the band has ever participated in, said THS band director Jon Bubbett.

The THS band recently became the third band in the state’s history to be selected to attend the National Concert Band Festival in Indianapolis, which will be held in March 2011.

“There are two major national events every year. The first is the Midwest Clinic, which is held every December,” Bubbett said. “The National Concert Band Festival is the second event.”

Bubbett said the event is “by far” the biggest honor the school’s band has ever received when he spoke to the Alabaster City Council during its Oct. 21 meeting.

During the meeting, several members of the band filled the council’s meeting room with symphonic sounds as they performed a pair of songs for the city leaders.

The performance was one of several the band has scheduled over the next few months, Bubbett said.

“We are going to try to get out to as many businesses and civic clubs as we can over the next few months, and we are going to try to perform at every one of those,” Bubbett said. “We have worked on a few corporate sponsorships, but a lot of them say that they don’t donate to school groups.”

Band members will work hard to raise funds over the next several months, in an effort to help every member of the band attend the trip.

The band has already sold books, held car washes and is currently selling different types of fruits and nuts to help raise the nearly $60,000 required to fund the trip for 80 students.

“This is a really big deal, and everyone is going to go,” Bubbett added. “You don’t go to a festival like this unless you take everyone.”

Many of the band members have been juggling the band fundraisers with fundraisers for other extracurricular activities, like church youth groups and school sports teams.

“We tried to space it out, so the kids wouldn’t have it all at once,” Bubbett said. “But we are going to have to get the majority of our fundraising done before Christmas, because donations usually drop off after that time.”

The per-student cost of the trip is about $780, and band members and parents have already stepped in to help other band members who are having trouble funding the trip, Bubbett said.

“I’ve told the band members ‘if you can afford to pay for the trip, that’s great. But you still need to be involved in the fundraisers to help those who can’t afford it,’” Bubbett added.

To become involved in one of the band’s fundraisers, or to donate to the band’s trip fund, call Bubbett at 682-5707, or e-mail JBubbett@Shelbyed.k12.al.us.

By NEAL WAGNER / City Editor A group of children take their seats on a small blanket under a tarp... read more