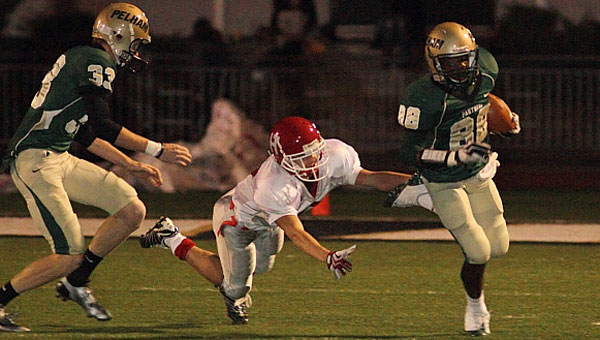 PELHAM — After starting the game strong with an 11-play scoring drive, the Pelham High School Panthers fell to the Hewitt-Trussville Huskies 20-10 in their final game of the season Oct. 29.

It wasn’t easy getting points in the first half for either team, with both defenses playing at the top of their game.

In the first quarter, Pelham held Hewitt-Trussvile to negative 3 yards and three punts. Pelham was forced to punt on both of its drives in the second quarter, but after a 13-play drive, Hewitt Trussville put their first points on the board with a 31-yard field goal to tie the game. The Huskies would kick another 29-yard field goal as time expired in the half to take a 6-3 lead into the locker room at half time.

The third quarter was owned by the Huskies. The defense stepped up and held Pelham to only 41 yards on the ground and forced an interception to keep the ball in the hands of the offense. After throwing an interception of its own, Hewitt Trussville came back and scored from 12 yards out.

After forcing a punt, the Huskies took only four plays and carried the ball in from 13 yards out to take a 20-3 lead into the final quarter.

With its backs to the wall, Pelham was forced to make some huge plays.

Junior quarterback Gray Cato threw a 29-yard pass to give his team some momentum. Three plays later, he squeezed the ball in from 1 yard out to narrow the lead to 10 points.

With the Panthers’ defense firing on all cylinders, it was up to the offense to make the plays.  The Panthers forced a three-and-out on both of the Huskies’ drives to start the fourth quarter, but could not find the end zone on offense. After a 90-yard return for a touchdown was called back for the Panthers, all the air was let out of the Pelham team.

After driving down the field a few plays, it was fourth-and-long and a last heave for a first down was dropped. The ball was given back to Hewitt Trussville to run the clock out for the win.

“It was a rough year,” said Pelham coach Brett Burnett. “At times we fought hard, and we just made too many mistakes. We just have to thank the seniors for their efforts and go back and get ready for next year.”

Pelham finished the game with 230 yards of total offense with 133 of those coming on the ground. The Panthers finish the season with a record of 2-8.