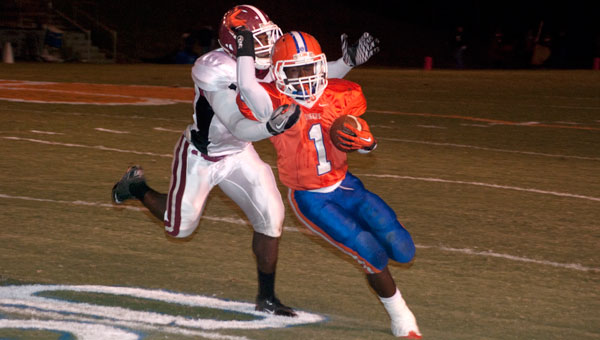 CLANTON — A season of hard knocks ended for the Shelby County High School Wildcats with a 37-16 road loss Oct. 29 to the Chilton County Tigers.

Three lost fumbles were costly for the Wildcats, as they came at inopportune times that stalled momentum swings in their tracks and led to Chilton County scores or excellent field position.

On the opening drive, zone read right and zone read left moved the Tigers’ offense down the field before they settled for a field goal. The Shelby County defense bent, but didn’t break.  Halfway through the first quarter, the home team led 3-0.

The Wildcats countered with an 11-play scoring drive that ended with a Brent Wooley surge from the 1-yard line.  Four ticks into the second quarter, the Wildcats had claimed the 8-3 lead following a 2-point conversion.

The remaining six minutes of the second quarter saw an 8-yard touchdown toss by the Tigers and a Wildcats’ fumble on the ensuing kickoff that resulted in an another Chilton County touchdown strike from the 15-yard line.  At the half, the home team held the narrow 16-8 lead.

In the second half, the Tigers delivered three additional scores with 6-yard, 1-yard and 71-yard scoring runs.  On the other side of the coin, the Wildcats found the end zone again when Wooley muscled in from the 2-yard line.

Speedster Denzel Williams finished the night with 170 yards rushing. The Shelby County offense chalked up 265 yard of total offense on the night.

Calera High School receiver Jeremy Hyde breaks away from a Dallas County tackler in the Eagles' 46-14 win in their... read more