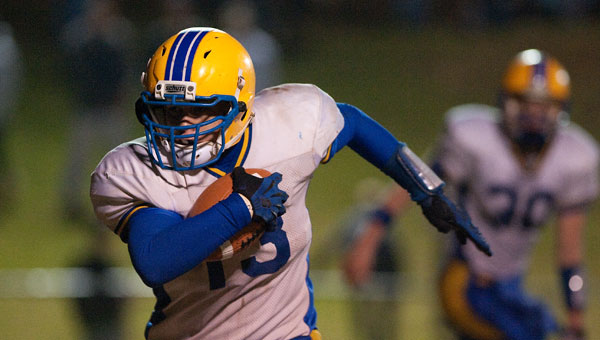 The Eagles had achieved a perfect 11-0 season by beating cross-town rival Evangel Christian School 49-16 in the Alabama Christian Sports Conference championship game, their second victory over the Lightning this season.

Hope recorded 441 yards of offense while holding Evangel to 141.

“Our guys deserve what they have earned. They can call themselves state champions because they earned it.

“I think Evangel came to play tonight,” Rettig added. “But our guys were a little more geared up to play.”

Evangel head coach Wayne Price said losing one of his key players to injury during the game had a big impact on his team.

“Losing Josh (Flanders) was huge. It’s hard for us to get a first down without him,” Price said. “Hayden Brown pretty much carried the team all night.”

Hope jumped to a 2-0 lead on a safety one play after Evangel recovered an Eagle fumble on the Lightning 1-yard line.

But Evangel answered back in the second quarter when Brown connected with Brandon Mackey on a 10-yard touchdown pass. Brown added the two-point conversion.

Hope added three more touchdowns in the third quarter, one on a 7-yard reception by Caleb Douglas, one on a 2-yard Ben Nafe run and the third on a 46-yard run by Terrence Moore.

Caleb Rettig and Glyn Glover added two-point conversions on the first and third touchdowns of the third quarter, respectively.

Evangel lit up the scoreboard early in the fourth quarter on a 1-yard Brown run. Brown added the two-point conversion to bring the score to 41-16.

Hope’s final score came when Hughes connected with Moore on a 50-yard touchdown pass. Douglas added the two-point conversion to bring the game to 49-16.