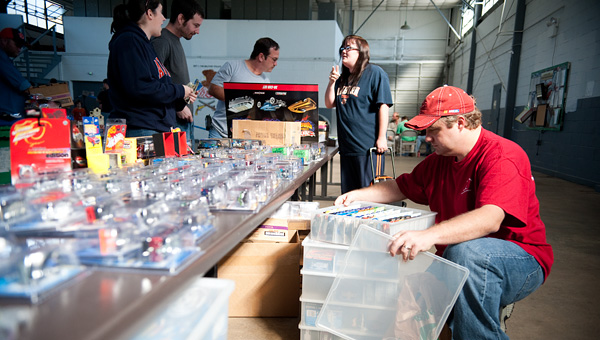 Chad Whisnant searches for Ford Mustang Hot Wheels cars in the bins of other collectors during the convention on Oct. 30 in Calera. (Reporter Photo/Jon Goering)

CALERA — Sports cars of all makes and models entered Calera this weekend from across the state. The cars were sold and traded among owners and raced in down hill competitions by adults and children. Thousands of the cars were on display inside the National Guard Armory as each one was only 3 inches long.

The Heart of Dixie Hot Wheeler’s Collectors’ Club hosted a state-wide meeting Oct. 30 for club members and collectors. The club is the only Hot Wheels collector club left in the state and was started in 1994 in Calera, said Paul Douglas, club president.

The meetings are held about three times a year and draw collectors from Alabama, Georgia, Mississippi and Tennessee, he said.

About 80 collectors packed the National Guard Armory on Saturday morning as they sold, bought and traded cars.

“They’re always coming to shows looking for the old cars in decent condition,” Douglas said. “Some are very rare and can be worth good money. Other people are just trying to complete their collection.

“In the ‘80s and ‘90s, collecting was real big,” he added. “Since then it’s gone down with the economy. Right now it’s a buyer’s market. People are hurting, they need the extra cash.”

Douglas said for many collectors, the meetings are more about bringing back memories from childhood than buying and selling. 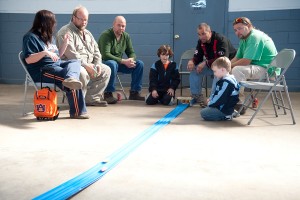 Collectors watch during the Hot Wheels races during the convention in Calera. (Reporter Photo/Jon Goering)

“It brings back memories and nostalgia,” he said. “Some people collect baseball cards. This is the same thing.”

Douglas has a collection of 6,000 Hot Wheels, 5,000 of which are on display at his home in Alabaster. He was born in 1968, the same year the toy cars hit the shelves for the first time.

“Just like Barbie, Mattel made Hot Wheels for boys and it took off like wildfire,” he said. “Matchbox cars had been around for a while but they weren’t as fast and didn’t have that California look.

“I’ve been collecting since I was born,” he added. “My brother is 10 years older than me and started giving me Hot Wheels before I was old enough to play with them. He showed me how to play with them and then put them up so they stayed nice.”

Douglas said like many of the collectors, he still has his original collection from when he was a child.

Each meeting allows collectors to introduce the love of Hot Wheels to the next generation while letting them relive their childhood at the same time, he said.

“It’s a forum for people with similar interest to get together every year,” Douglas said. “It lets you be a little boy again for a few hours.”

A B-17 lands on the runway at Shelby County Airport on Oct. 29. (Reporter Photo/Jon Goering) By KATIE HURST/ Staff... read more